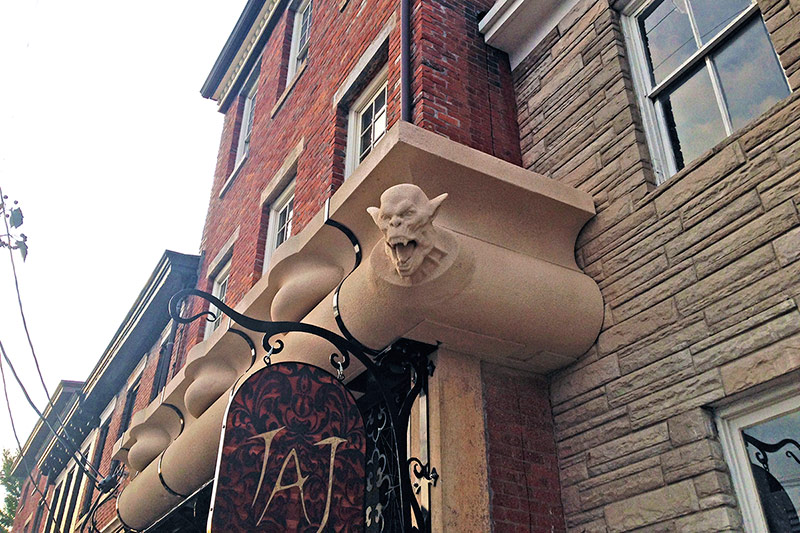 It’s hard to miss the ghoulish screaming face jutting from the facade of 807 East Market Street in Nulu. It’s the site of what will eventually become a bar and lounge called The Taj. And it’s been a long time coming.

Insider Louisville’s Sara Havens checked in on the project Monday with news that owners are aiming for a Derby opening. The bar features a rather eclectic design, but the building that houses it has just as much of a colorful history. It was one of the first projects we covered on Broken Sidewalk in 2008 when building owner Mike Maloney was in the process of saving the structure from a failing facade.

Dating to the late 1840s, the three-story brick and stone structure once housed a grocery store with a residence above. That business closed in the Great Depression and the upper two floors were converted to three apartments in the late 19th century. More recently, the storefront housed Old Louisville Antiques in the 1970s through the ’90s before sitting vacant for a number of years.

In a slow and tedious process, Maloney deconstructed the bowing brick facade and rebuilt it, adding back dormers that are believed to have once been on the building. In a similarly exhaustive process, Havens says Maloney’s friend Ken Blackthorn is behind The Taj, which has been under construction in some form or another for since 2014.

Photos teased on social media show a bar that’s part speakeasy, part steampunk dive, and part rustic hideaway. Reclaimed wood and shutters cover the ceiling, pivoting bar stools that Havens says are reclaimed from an elevator, Edison bulbs, plenty of local art, and who can miss the intricate steel awning and the screaming ghoul presiding over the entry.

Insider Louisville’s Caitlin Bowling previously reported on the project in July 2014 before the new facade details were installed. Bowling then said Todd Moore, owner of Construction Consultant Services, was behind The Taj. Moore said then that he hoped to have sidewalk tables, small cold plates (as there will be no kitchen), and that the venue will be more affordable than surrounding bars and restaurants, with drinks topping out at $9.

Checkin in again in August 2015, Bowling noted that Moore had taken on “a couple of unnamed private investors” to help get the apparently stalled project up and running. By then, the new facade had been installed, and Bowling noted that the “consensus at the recent NuLu Business Association meeting was less than glowing.”

It’s welcome news that The Taj is moving forward and has an opening in sight. Another bar can only help Nulu’s nightlife, which is approaching a critical number of bars that can sustain walking and hopping from one place to another. What do you think?