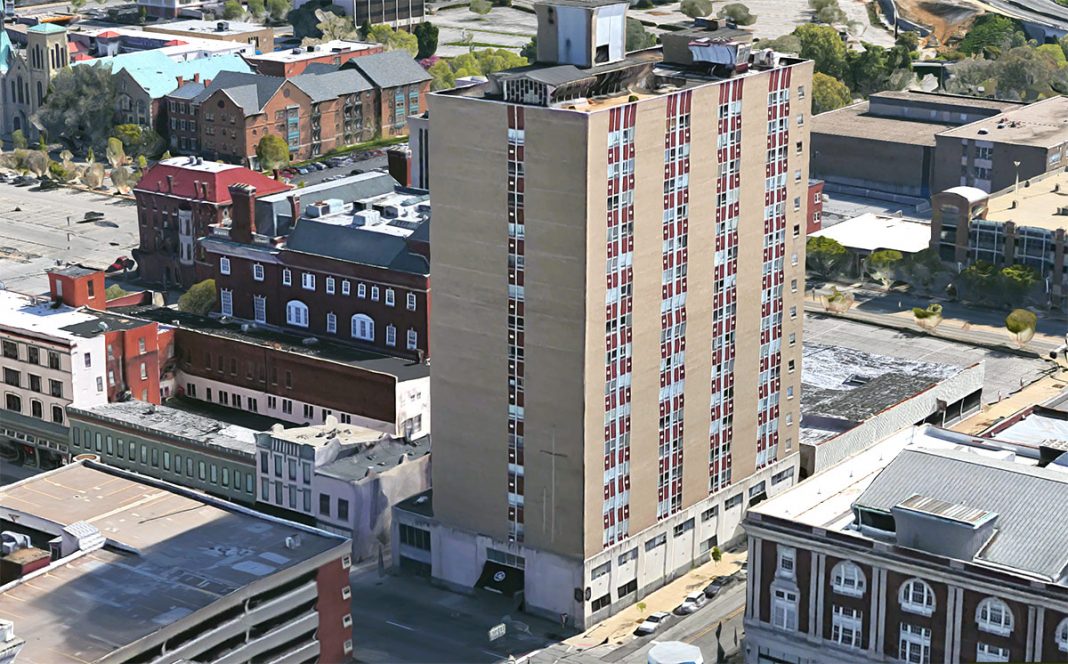 The Barrington Place Apartments on the corner of Third and Guthrie streets have seen a lot in the past few years. Back in 2014, the 17-story property went into foreclosure resulting in its sale for $5.87 million to Utah-based investment firm Sundance Bay (that’s up from its 2002 sale price of $1.3 million in which the 218-unit tower was renamed Barrington Place—it was called Trinity Towers when it opened in 1962). In March 2015, the new owner invested $562,500 in renovations to the building. Then this past May, the building sold again for $12.8 million to Nashville investment firm Covenant Capital Group.

Now the tower at 537 South Third Street has been rebranded as the Vue at Third, keeping pace with other recent apartment projects like the Amp on Frankfort or the Axis on Lexington. And there’ll be new amenities and signage marking the change.

Plans were filed with the city this month for the new signage to replace temporary banners previously installed on the building. In total, six new signs in various sizes—from a 1.5 square foot resident entry sign to a 280-square-foot marker readable from Interstate 65—covering planned for a total of some 400 square feet. Many of the signs are simply replacements of older Barrington Place signs on the building.

According to the application, the signage simply needs review by the city as there are no signage rules in place for multifamily buildings in the Downtown Form District. The new owners plan to keep the Hometown Hero banner of Kentucky’s Colonel on the building’s east facade.

And there could be more change on the way for the Vue at Third. “Over 3 million dollars is being infused into the project to restore resident’s [sic] sense of place and pride in their neighborhood,” the application reads.

A call to Covenant Capital Group Managing Partner Rick Scarola seeking additional information was not immediately returned, but we’ll have an update when we know more.

A number of active permits, mostly for electrical work at the building have been issued by the city. One building permit reveals that $150,000 in renovations is planned for the Vue’s 4,220-square-foot lobby. Those renovations carry an architect’s stamp from Louisville’s Prodigy Construction Corporation.

Apartments in the Vue range from $900 per month for 430-square-foot studio to $1,100 for a 606-square-foot one-bedroom. A variety of floor plans are available. Units carry amenities like a washer and dryer, quartz countertops, and, interestingly, “HGTV Inspired Cabinetry.”

The Vue’s website lists the building amenities as including an “Extravagant Rooftop Lounge” with an outdoor kitchen, a pet boutique, a Wifi Lounge with a cafe, a wellness center, and, interestingly, a “24-Hour Juice Bar.”