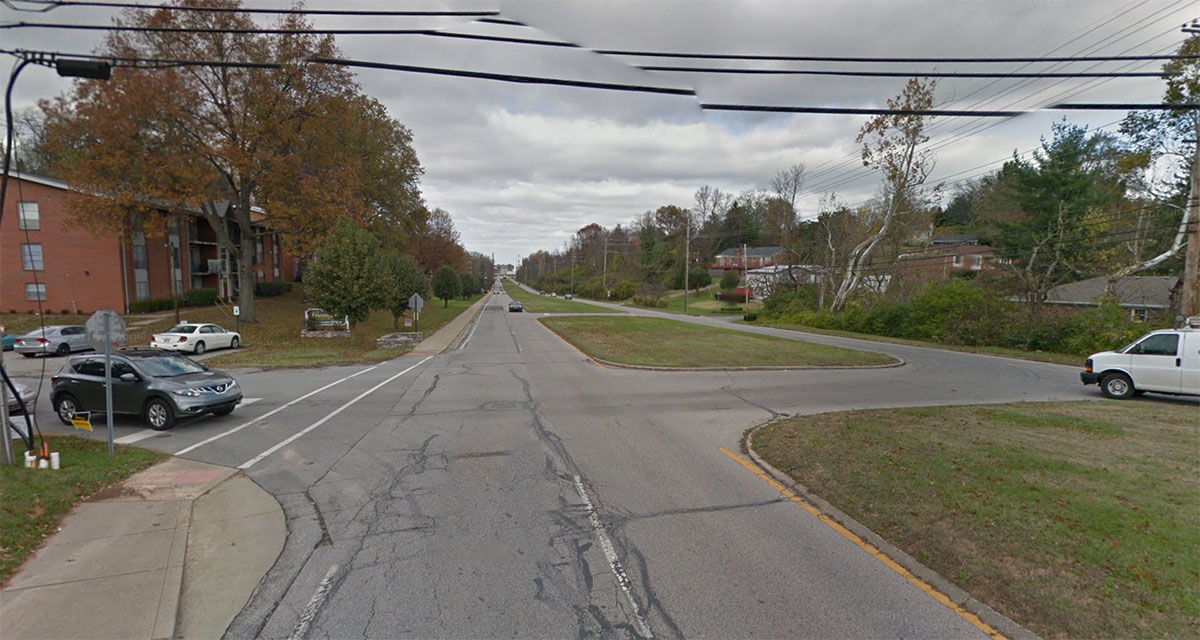 A woman was struck and killed by a motorist on Zorn Avenue on Sunday April 17.

The fatal collision took place around 1:00a.m. on Sunday morning at the intersection of Zorn Avenue and Cleveland Boulevard in the Clifton Heights / Brownsboro Zorn neighborhoods just north of St. Leonard Catholic School. The motorist was driving a white SUV.

The incident was reported by WDRB, WLKY, WHAS11, the C-J’s rewrite of the WHAS report, and a fatal collision roundup by WAVE3. WDRB, WAVE3, WHAS11, and the C-J all labeled the collision an accident. WLKY’s report was the best of all the local news stations—barely.

All of the local news outlets regurgitated the Louisville Metro Police Department’s victim-blaming claim that the woman was not in a crosswalk, but none of them bothered to check the conditions on the ground. There are few sidewalks in the area despite Zorn Avenue connecting a relatively dense part of Clifton Heights / Brownsboro Zorn neighborhoods with immense recreational opportunities along River Road. The sidewalk also changes sides of the street at one point, with no crosswalk in sight. And good luck navigating the interchange with Interstate 71.

At the intersection where the crash happened, a TARC stop is present with a bench and a neon yellow marker that reads pedestrians ahead. The speed limit along Zorn Avenue is posted at 35 miles per hour, but the street design and lack of controlled intersections make the stretch into a speedway connecting the interstate with Brownsboro Road.

The LMPD attributed this death and three other traffic fatalities that occurred over the weekend to warm weather. “Obviously with the turn in weather, with the great weather, motorists are going to have to pay attention to motorists, walking or on bicycle,” LMPD’s Dwight Mitchell told WHAS11.

Louisville is in the midst of a three-year, federally funded pedestrian safety campaign called Look Alive Louisville due to the city’s above average fatality rate among pedestrians.