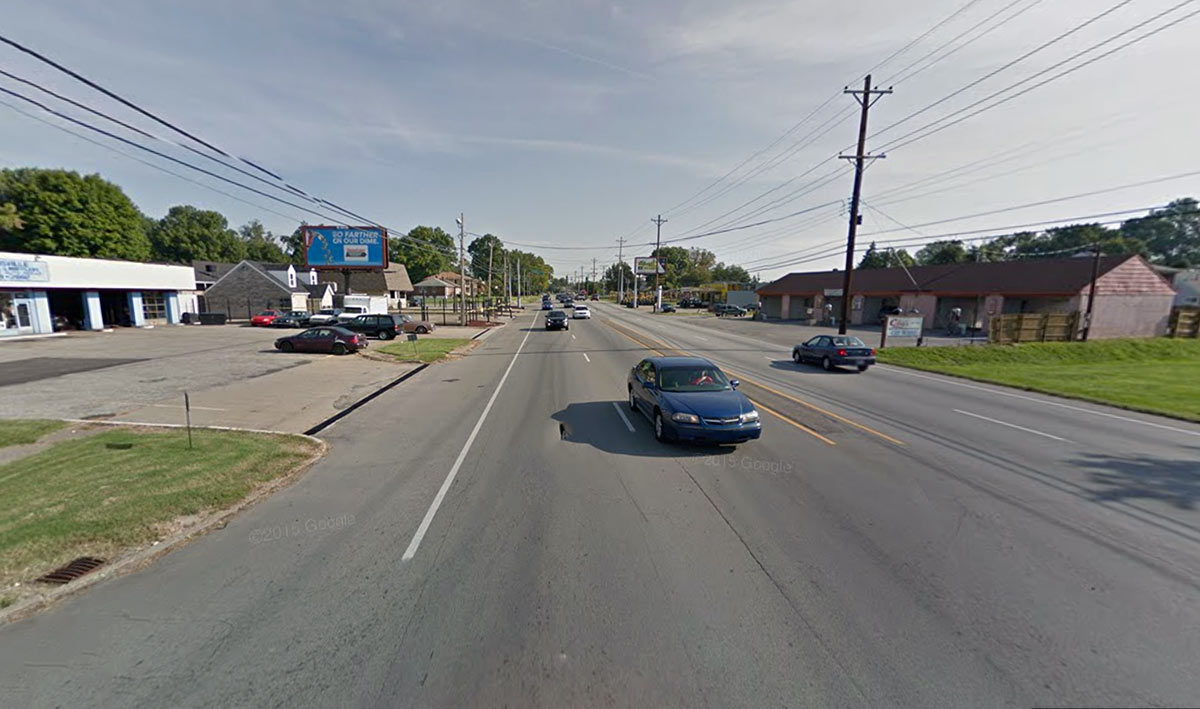 In early May, a woman walking along Dixie Highway near Farnsley Road in Shively was struck and killed by a motorist. The incident took place Sunday, May 8 around 10:30p.m.

Carolyn Warner, 55, was struck by an unidentified motorist driving an SUV. She was reportedly trying to cross the street. According to news reports, no charges were filed against the driver. The collision was reported by WAVE3, WLKY, WDRB, and WHAS11.

The news media offered few details of the incident, but WAVE3, WHAS11, and WLKY all called the crash an accident, and WDRB questioned police as to whether the woman was in the crosswalk, a typical tactic establishing pedestrian blame. Police would not say where Warner was struck. None of the news reports indicated that she was struck by a driver, rather the too-brief articles all removed the driver, claiming the woman was struck by the vehicle, or just struck. Poor reporting all around. What we do know is that there are no crosswalks in the area at all. To reach the next crosswalk, a person walking on Dixie at Farnsley Road would have to walk 1,650 feet south to Nobel Place or good luck going north where the next crosswalk doesn’t appear for over a mile at Millers Lane. Compounding the problem, there are only a few sidewalk remnants in a disconnected network here, forcing pedestrians through empty fields, a disarray of parking lots, or worse, onto the roadway shoulder. The corner radius at Farnsley Road is also grossly oversized, allowing motorists to take the turn at unsafe speeds, and a TARC stop on the block is a barely noticeable sign on a telephone poll in a grassy patch sandwiched between traffic and a parking lot. The speed limit on this stretch of Dixie Highway is posted at 35 miles per hour, with the residential side streets marked at 25mph, but the area is designed for speeds much higher than that. The four-lane highway is divided by a small, raised median and flanked by asphalt shoulders and almost no street trees, opening up the field of view and making higher speeds feel appropriate on the streets oversized travel lanes. An overabundance of curb cuts sends motorists unpredictably into parking lots at all points along the roadway, creating a dangerous chaos.

The death of Carolyn Warner was no accident, Dixie Highway is dangerous by design.

Louisville is in the midst of a three-year, federally funded pedestrian safety campaign called Look Alive Louisville due to the city’s above average pedestrian fatality rate. We track pedestrian and cyclist collisions here. The city is working with the state to redesign a large portion of Dixie Highway to increase safety, and those changes can’t come soon enough.