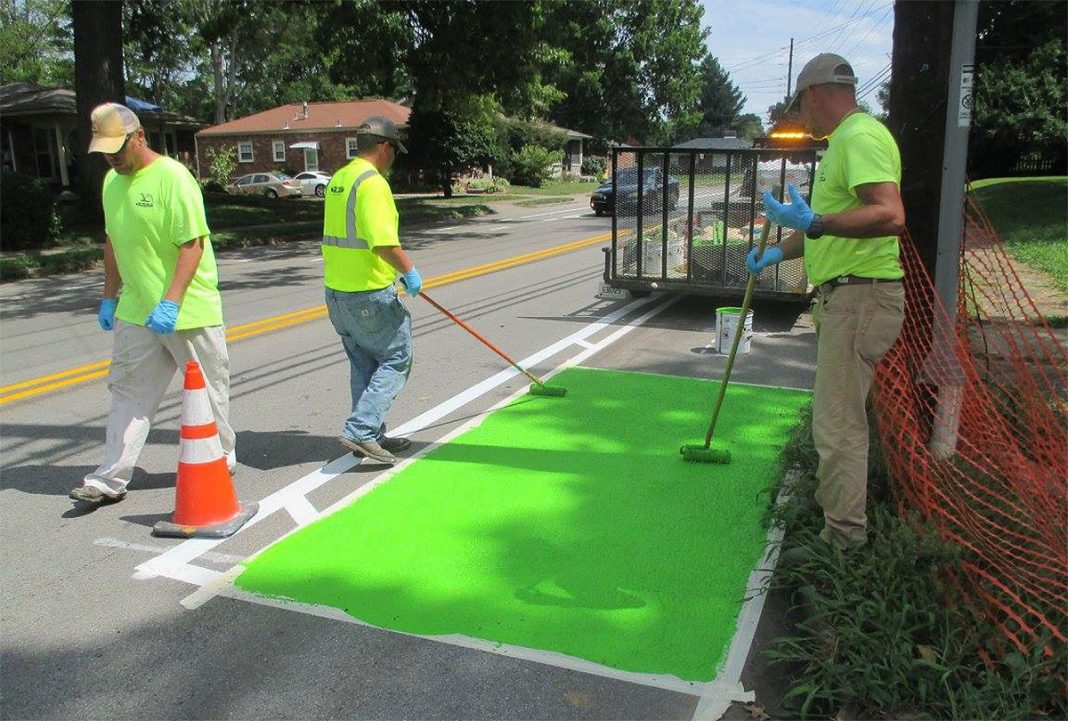 (Editor’s Note: As you’ve likely noticed, Broken Sidewalk has been sidelined for several months. Last Spring, I was diagnosed with Leukemia and immediately went into treatment. As editor of the site, I kept publishing as long as I could, but eventually, I had to take time off to focus on my health. Last Fall, I underwent a bone marrow transplant and have been slowly recovering from the effects of chemotherapy and radiation. The good news is it looks like the cancer is gone and I’m feeling a lot better. So with that, we hope to get Broken Sidewalk back on its feet. Thanks for so many of your kind thoughts and prayers throughout this difficult time, your continued patience, and for caring about the future of the city. This project only works if there’s someone on the other end of the line.)

While I was gone, Louisville received some major recognition in its efforts to become more bikeable. First up, Bicycling magazine named Louisville the 31st best biking city in its biennial look at American cities. Rankings were determined based on an analysis of Census data, discussions with national and local bike leaders, and key bike-friendly indicators like the number of female bike commuters. The magazine cited the opening of Louisville’s bike and pedestrian Big Four Bridge connecting Waterfront Park with Jeffersonville, Indiana, among the city’s success stories. Since it opened in 2014, the bridge has been wildly popular, promoting walking and biking throughout the community.

Dille also checked in with Louisville’s biking setbacks, such as a recent slashing of the city’s bicycling program’s budget and lack of advanced infrastructure on Louisville’s growing network of Neighborways, low traffic streets perfect for cycling. Still, Louisville’s rank at 31 is good news as it shows we’re batting above average. The list was topped by Chicago, San Francisco, Portland, New York City, and Seattle, with local peers like Indianapolis clocking in at 11 and Pittsburgh at 20. Further down the list, Cincinnati ranked 36, Columbus was 39, and Atlanta came in at a dismal 43.

Louisville is up sharply from Bicycling’s 2014 list when the city ranked 43 in the nation. The city was listed at 21 in both the 2012 list and the 2010 ranking, but in recent years, the field has become much more competitive.

While Bicycling magazine has plenty of good things to say about Louisville, it also printed some nice words about your favorite place for urbanism online—Broken Sidewalk. Take a look:

Louisville’s Broken Sidewalk blog is perhaps the nation’s best local outlet chronicling a city’s urban transformation. The site’s clean design and enlightening content regularly features posts from some of the country’s top thinkers on utilitarian cycling. Every city that wants to improve biking needs an online publication this good.

Last Fall, the League of American Bicyclists also took a deep dive into newly released 2015 Census data on commuting to determine the changing landscape of biking across the country. Nationally, bike commuting dropped 3.8 percent—the first time since 2010. The League believes this decrease is due to a number of factors including low gas prices and a distinct increase in vehicle miles traveled (VMT), which, the League noted, corresponds with an increase in traffic fatalities.

Locally, Louisville was ranked 49th for its rate of bike commuting, which stands at a meager 0.4 percent of the population. According to Census data, that’s up significantly from 1990 (about 115 percent increase), about even with 2010 (a 1 percent increase) and down from 2014 (by about 20 percent).

Portland, Oregon, topped the nation with a 7 percent bike commute rate followed by Minneapolis with 5 percent and San Francisco with 4.3 percent. Lexington was listed at 28th nationally with a rate of 1 percent. Among Louisville’s peer cities, Pittsburgh’s 1.7 percent bike commuting rate landed it at 15th, Indianapolis came in at 40 with 0.6 percent, and Cincinnati took 53rd with a 0.3 percent rate of bicycle commuting.

Also last year, Old Louisville was specifically highlighted among the top ten most bikeable urban areas by real estate site Redfin. The Victorian neighborhood, which also took the honor of one of America’s best neighborhoods as determined by the American Planning Association, came in at 6th best. The top five includes Philadelphia, Tuscon, Austin, Denver, and Portland.

“Louisville has invested in bike lanes… [that] have given residents a healthy, safe option to travel between neighborhoods and to downtown,” Louisville Mayor Greg Fischer said in a statement last May. “But the work is hardly done. Our city is in the process of rethinking how we connect, and bicycles are a major part that strategic mobility plan.” The mayor referenced the city’s draft Move Louisville plan, a 20-year mobility framework, which calls for drastically reducing vehicle miles traveled (VMT) across the city. The plan expects biking and walking will play a large part in achieving those goals.

Old Louisville (and many of Louisville’s urban neighborhoods) is particularly suited to biking with growing infrastructure, a central location, a well-connected grid of streets, and flat terrain. That’s good news considering the neighborhood will be at the center of a new bike share program set to launch later this year.

What’s all this mean?

Louisville has made some serious progress in building up its bike network, but there’s a lot of work still to be done. As Bicycling magazine pointed out, the city has upgraded its infrastructure but lags behind other cities like Indianapolis in terms of high quality design for protected bike lanes. Louisville’s successful Neighborways is promising but today it’s little more than a collection of sharrows. More substantial design including signage and traffic diverters should be installed to make the system easier and safer to use. To achieve these infrastructure goals, the city’s agency covering bicycling, Bike Louisville, should see its budget increase annually, not decrease. And the city’s miniscule rate of bike commuting could easily be improved.

There are good things on the horizon as well. Louisville continues to build out its bike network with more innovative designs than we’ve seen in the past and a new bike share system is set to launch later this year. Bicycling for Louisville recently listed the city’s biggest bike wins of 2016, which included new protected bike lanes on 12th and 13th streets, ongoing planning for an extended Beargrass Creek Trail, and expansion of the Neighborways program. This year, the group is advocating for protected bike lanes on Castlewood and Barret avenues and road diets along West Jefferson Street in Russell and along Oak and Winter streets in the Highlands.

These infrastructure improvements are also critical for Louisville to reduce its dependency on automobiles. Research has shown that the better a city’s bike network, the more people bike. Louisville’s network is beginning to reach a critical capacity with easy to use bike lanes and Neighborways where biking becomes a very comfortable and safe option for for a larger percentage of the population. Options like well-designed protected bike lanes can help encourage people who haven’t commuted by bike to give it a try. And with only 0.4 percent of the population saddling up to go to work, there’s plenty of room to attract new audiences.

What’s on your bike wish list for Louisville? Do you commute by bike? Share your vision in the comments below.