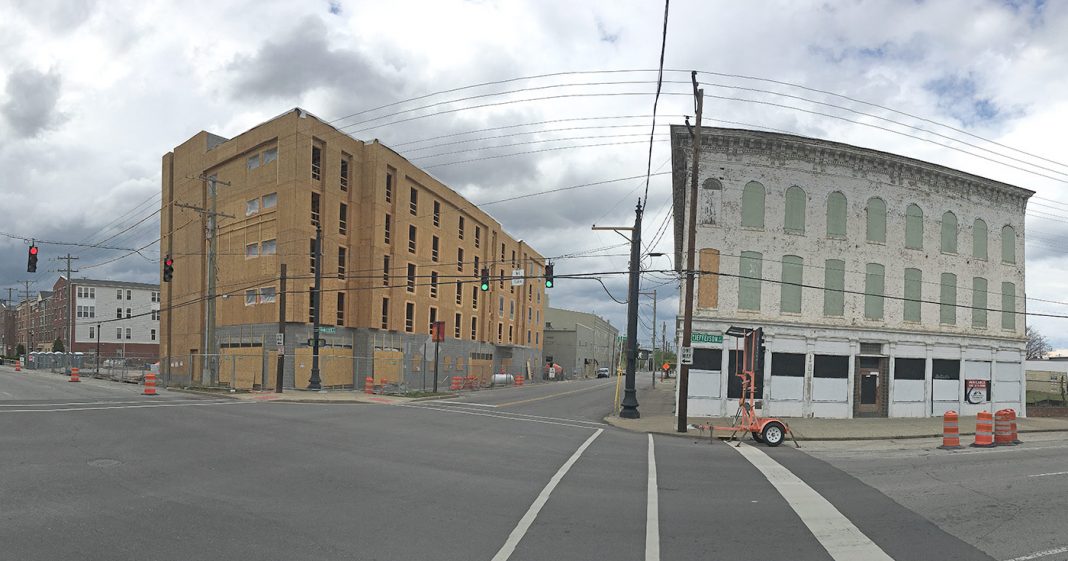 Construction in Nulu will be more active than ever as two hotels will both soon be under construction. We’ve known about both hotel projects for a while now—a Home2Suites Hotel by Weyland Associates and an AC Hotel Nulu by Creation Gardens owners Ron and Mollie Turnier and team. Here’s the latest.

Predominantly facing Hancock Street, Weyland’s Home2Suites Hotel by Hilton is well into construction with framing complete and the building being sheathed in plywood. It looks like a real building—a welcome sight for what has long been a parking lot at the northwest corner of Hancock Street and Jefferson Street.

When we last checked in this past August, crews were tinkering with the corner site across the street from the Louisville Chemical Building, which will become apartments and retail via the Weylands, and the 310 @ Nulu apartments, also a Weyland project. Weyland Ventures (formerly City Properties Group) has staked out something of a small empire in the area, additionally developing townhouses, student housing, and retail space in the Hancock Street corridor south of Jefferson.

The new hotel will include 100 rooms, an indoor pool, and a surface parking lot facing Jefferson Street. On our recent visit to the site, it appears that the Louisville Chemical Building has not yet begun renovation. The previous plan was for that project to be under construction by last October. The Home2Suites project was first announced at the end of 2015 and the historic renovation some time before that.

A groundbreaking ceremony has been scheduled for 10:00a.m. on Tuesday, April 11 at the corner of Shelby and Market when the Turniers and officials from Concord Hospitality Enterprises and the official developer, The 725 Partners, will speak.

The hotel is estimated at $38.6 million and will include 150 rooms, an 188-car parking garage facing Shelby, and 5,000 square feet of retail space. For more on the design of the AC Hotel Nulu, check out our previous story.

Construction is expected to take 13 months. The Turniers have planned to develop the parcel since 2009 although plans have changed several times along the way. The 725 Partners includes the Turniers and Rob Webber of Creation Gardens, local developer Terry Cheynoweth, and Steve Kersey, principal of Kersey & Kersey Architects, the local firm working on the project. The design architect is Chris Meyers of Columbus, Ohio–based Meyers & Associates Architecture.

(Editor’s Note: This article has been updated. A press release from AC Hotel Nulu incorrectly stated that the project included a rooftop bar and overstated ground level retail space by 3,000 square feet.)