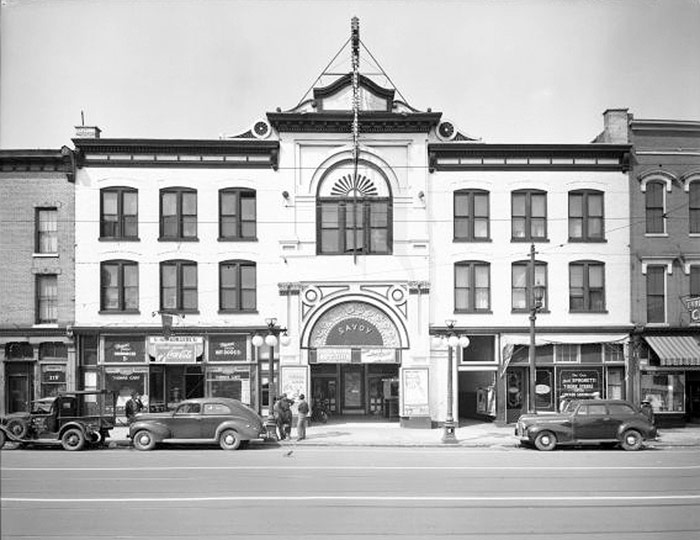 When you think of historic theaters in Louisville, Fourth Street immediately comes to mind, but many other theaters were scattered all over the city including the Savoy Theater once located at 223-227 West Jefferson Street. Before it was the Savoy, the theater between Second and Third streets was known as the Buckingham Theater, the Grand Opera House, and later the Jefferson Theater. On its opening night of September 3, 1894, the venue was the city’s grandest burlesque and vaudeville theater, according to the Encyclopedia of Louisville. The Savoy was designed by architect and owner D.X. Murphy, whose firm also designed the iconic Twin Spires and the demolished U.S. Customs House once on Fourth Street.

The exterior of the three-story Savoy Theater featured an ornate half-round detail above the marquee and main entrance and a raised central pediment at its peak. Two retail spots flanked the theater and a set of ornate, five-lanterned street lights further set off the entrance. Inside, a single theater had a capacity of 1,600 people and a stage measuring 31 feet by 40 feet with a 38-foot-tall proscenium. In the golden age of vaudeville and burlesque (seen misspelled on the marquis above as “burlesk”), the Savoy’s major competition came from the younger Gayety Theater one block west on Jefferson Street.

The Savoy’s tragic story is magnified by the extent of ruin that befell this section of Downtown Louisville throughout the 20th century. Only a handful of buildings predating the World War II remain for blocks around (see map below with demolitions marked in red) in what was once a bustling part of the city. On the same block, for instance, the large Tyler Hotel on the corner of Third and Jefferson streets—seen in the photo above as the Earle Hotel—was also destroyed by implosion. Equally saddening are the countless, undervalued vernacular buildings surrounding these obvious landmarks that were carelessly razed without much thought. These essential buildings that create the true fabric and character of a city are all but extinct in Louisville. Immediately east of the Savoy, a large three-story brick building on the corner was once home to the Jefferson Meat Market, Gargotto’s Bar & Cafe, and the Bargain Bazaar, but was demolished in the 1950s (see building below). On the opposite corner of Second Street (see above), a four story building featuring a Mansard Roof, that steep French-style variant that became popular in the 1880s, is also long gone along with nearly every other example in the city.

Vaudeville and Burlesque shows couldn’t compete with new moving pictures and the theater suffered further hardship through Prohibition. A movie screen was installed in the 1920s, but later it began to decline, with a strip show first appearing in the 1950s. By the 1980s, the Savoy had fallen into disrepair and had become a home to bars featuring go-go girls and the theater was showing adult movies. Photos from the 1980s may be seen here and here and here. The building was demolished in 1989 after sustaining damage in a fire that some sources report as arson. Even without the fire, the building would have been torn down as the city mounted a crusade against the so-called “porno district” and the entire block was later cleared for the expansion of the Kentucky International Convention Center. Burlesque has seen a surge in popularity in many cities across the country in recent years, but unfortunately its history in Louisville is all but gone.