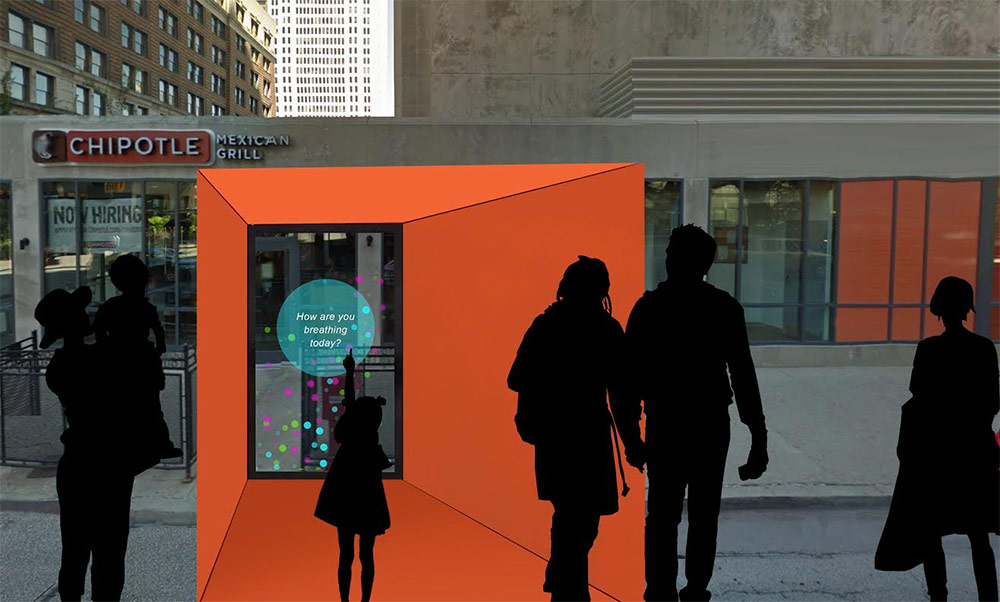 There’s something in the air in Louisville. The city’s air pollution regularly ranks among the nation’s worst, but a new data visualization project by designers in Brooklyn and data scientists in San Francisco launching next week hopes to raise awareness around the issue with a “gamified” public art installation in Downtown Louisville.

An orange powder-coated steel kiosk called Air Bare will be installed at the corner of Fourth Street and Liberty Street, and will make microscopic air particles visible to the human eye. The structure is being fabricated by Louisville-based Core Design, the same firm that built the shipping container bars for Resurfaced. At its center, a “portal” will allow the public to engage in a high-tech augmented reality display that overlays air pollution streamed live from sensors around the city. “What you’re seeing is a real time feed of particulate matter and carbon monoxide,” Shagun Singh, principal at Brooklyn-based Urban Matter Inc, told Broken Sidewalk. “It’s literally the particles you see in the amount of particulate matter and carbon monoxide in the air at that location.”

“The project was originally supposed to take place in India,” Singh said. But the idea for a “Sensored City,” the brainchild of Puneet Kishor, manager of science and data at San Francisco’s Creative Commons, received funding from the Robert Wood Johnson Foundation with a stipulation to build in the United States. Creative Commons teamed up with air pollution sensor manufacturer Manylabs for the project. “Puneet wanted to explore Bangalore or another city in India as a potential place to put these sensors given that air quality in India is pretty horrendous,” Singh continued. “So he was trying to think of places in the U.S. where air quality really sucked.” Thanks to a chance encounter with Ted Smith, head of Metro Louisville’s Office of Civic Innovation, that city became Louisville.

Along the way, additional players such as Rebecca Matheny at the Louisville Downtown Partnership, Sarah Lindgren, Mayor Fischer’s public art administrator, and local philanthropist Christy Brown joined the effort. Brown hosted the design team for a public workshop in Louisville last fall. That workshop looked for ideas on how to address issues of pollution in Louisville and begin ideas about the project’s design.

“The question that we asked [at the workshop] was, ‘So what’s the deal? Why don’t people care about air quality much?’,” Singh said. “It really came down to the fact that it’s something that’s invisible. And things that are unseen, people don’t care about.”

And that—making the invisible visible—happens to be at the top of Urban Matter Inc’s skillset. “We are responsible for creating the central point where all this air quality data will be displayed,” Singh said. “Our specialty is in humanizing data and technology. We communicate difficult ideas to regular people. We created this user interface that is really playful and educational and informative. We’re translating all this data into something that people can actually grasp and understand.”

Air Bare doesn’t just display air pollution data—it invites the public to interact with it in the form of a video game. “People can actually touch these particles. They can play with it, pop the bubbles,” Singh explained. “If they pop a lot of these air particles they get points. There’s also a pop-quiz component. As you pop these air pollutants, you get questions about air pollution. You’re supposed to go through the whole round of questions to get more points and beat a high score.”

Singh’s team will fly in to Louisville on Monday to begin installing Air Bare. An official dedication is scheduled for next Thursday followed on Friday by a health symposium (with Prince Charles in attendance). Later on Friday evening, Singh will participate in an artist’s talk in partnership with local non-profit IDEAS. Air Bare will be on view for six to eight months.

When it launches, Air Bare will show air quality data from a sensor alongside the kiosk at Fourth and Liberty streets, but additional sites across the city will be added as they come online this spring. “Once they’re all active, people will be able to choose a location from the touch screen and see the reading of air quality data of that particular location at that particular time,” Singh explained. She said that a map of all the sensor locations is still being finalized.

Urban Matter Inc has previously completed similar data visualization projects in Brooklyn, such as Silent Lights, which showed sound pollution underneath an elevated highway using changing lights emanating from perforated steel arches. “We wanted to raise awareness about how noisy it gets,” Singh said. “The lights respond to traffic noise. If it’s really loud and it turns red that means it’s above a certain decibel level. And if it’s blue that means it’s comfortable for human ears.” She said Urban Matter Inc studies these hidden phenomena and applies design to make the data useful. “Right now there’s so much data that cities produce on a day to day level,” Singh said. “People don’t really understand or don’t know what this data is all about.”