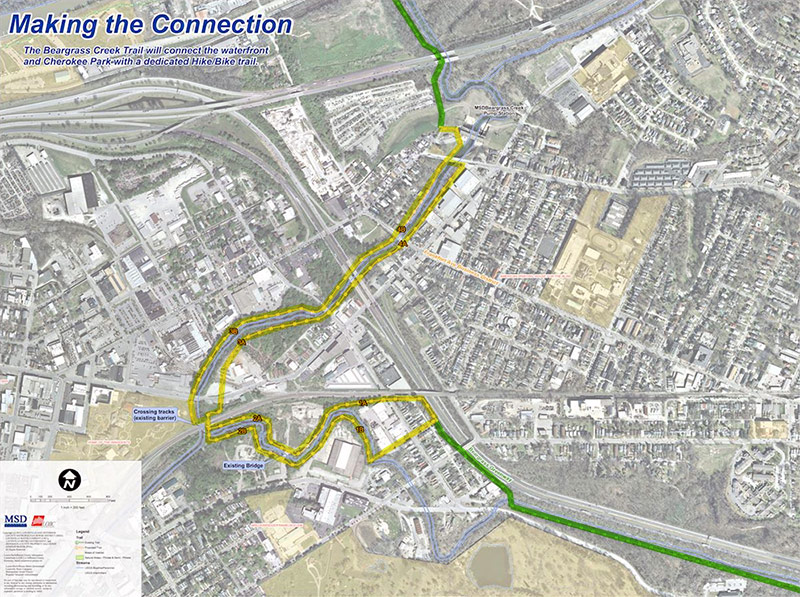 The Beargrass Creek Greenway winds its way from Cherokee Park through Irish Hill toward the Ohio River—but taking the trail today, you’d never make it to the waterfront. The bike and pedestrian path includes two segments along the creek (marked in green above): the first through Irish Hill and a second in Butchertown along the old alignment of Letterle Avenue. The missing segment (marked in yellow) in between, however, could soon be filled to create a complete off-road bike trail connecting Cherokee Park with Waterfront Park. But first, community funds must be raised to match funding from the Army Corps of Engineers.

According to the Butchertown Neighborhood Association:

Metro Parks, on behalf of the Beargrass Creek Trail Committee (a community group made up of representatives from the Office of Sustainability, U of L, Kentucky Waterways Alliance, Beargrass Creek Alliance, Bicycling for Louisville, Get Outdoors KY, Waterfront Development Corporation, Botanica and MSD) is seeking contributions to fund a conceptual plan to connect the missing link of the Beargrass Creek Trail between Waterfront Park and Cherokee Park, creating a continuous off-street path connecting two of Louisville’s most significant recreational assets.

The project would also include an evaluation of strategies to improve water quality and wildlife habitat along Beargrass Creek. Metro Parks has received a pledge of $75,000 in funding from the Army Corps of Engineers to start the planning stage of the project; however, the funding requires $75,000 in matching funds from the community. Half of the goal — $37,500 — has been obtained so far. But we need your help! Your donation of $100, $1,000, $2,500, or any amount would help Metro Parks attain the $37,500 still needed.

This afternoon, Monday, March 16 at 3:00p.m., you can also stop by for a photo op at the corner of Spring Street and Locust Street to help promote the greenway.