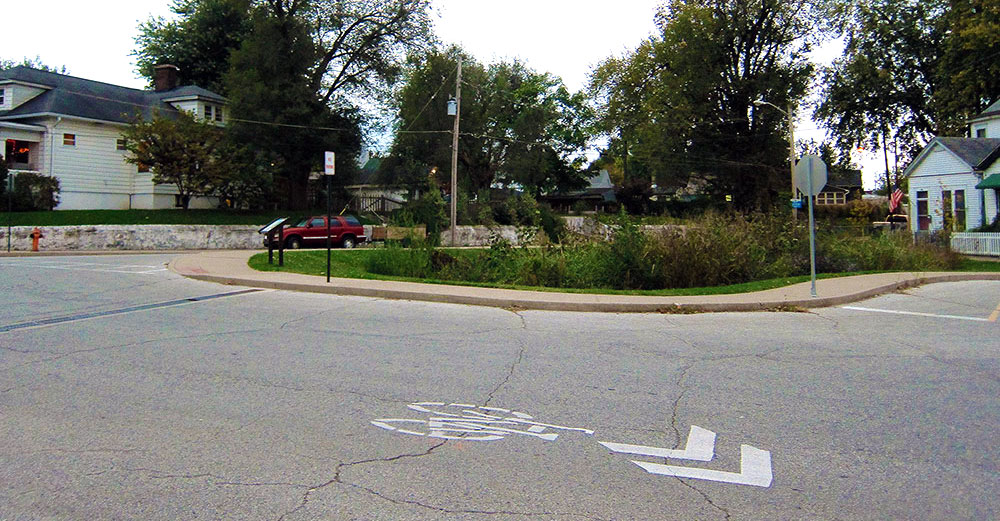 The best infrastructure projects aren’t single-minded—instead they solve many problems with a single design gesture. One of the top many-problem-one-solution projects we’ve seen is also among Louisville’s smallest interventions, and it’s tucked away on one of the German-Paristown neighborhood‘s most unusual intersections.

“If you look at this intersection, there are five streets that come together including an alley,” Wes Sydnor, program manager at Louisville’s Metropolitan Sewer District (MSD), told Broken Sidewalk. He was describing the intersection of Ellison Avenue, Swan Street, Dandridge Street, and an alley that was once an enormous swath of asphalt with traffic coming from all directions and no signage or markings to help pedestrians, cyclists, and motorists navigate the expanse. “So you have an intersection where the signage wasn’t as clear as it should have been and as a pedestrian it was a risky endeavor to cross there,” he added.

Why was Sydnor, who oversees green infrastructure programs at MSD, so interest in traffic patterns on an obscure neighborhood street? Because the paving was sending rainwater into an already overburdened Combined Sewer System, and in turn contributing to sewer overflows that continue to pollute nearby Beargrass Creek.

“From MSD’s perspective when you have that much pavement in an urban environment, when it rains, water hits it and it runs off into our combined sewer system,” he said. “That big impervious surface was contributing to overflows along Beargrass Creek and the Ohio River.”

The strange triangular shape of the intersection dates back to Louisville’s trolley days, when the Oak Street line made a right onto Swan Street and turned around in the space. “To give it a sense of scale, it was large enough for a trolley coming from downtown to do a full loop on tracks and then head back north,” Sydnor said.

Sydnor said the concept for the Germantown garden goes back five or ten years, when it was envisioned solely as a traffic-calming project. “There had had been discussion with the German-Paristown Neighborhood Association and various groups around town including Metro Louisville to improve the signage and layout there,” he noted. Later, as the project evolved, MSD was brought on to add another layer to the redesign: sustainable green infrastructure in the form of a rain garden.

“We looked at it and realized it had an overflow benefit to us,” Sydnor said. MSD is in a consent decree with the federal government to reduce number and volume of overflows. “One of the tools we have to [reduce overflows] is to implement green infrastructure—we’re using natural solutions to store and treat rainwater before it gets into the combined sewer.”

Sydnor said the intersection was laid out according to how water would run off the pavement from surrounding streets. Metro Public Works was consulted to help minimize the number of decisions a driver has to make when coming through the intersection.

The garden, wrapped in a new sidewalk, extends into the intersection to narrow the road bed. Notches cut into the curb and drains embedded into the street divert water from the surrounding pavement into the garden, where it is stored until it can naturally infiltrate back into the ground. Sharrows were painted for cyclists and another sidewalk bumpout on Dandridge provides additional traffic calming.

The landscape design uses native plants and takes into account what the space looks like in different seasons. And there’s not an issue with insect pests or mosquitos, Sydnor explained. “These gardens are designed to drain. We don’t want to hold water in them for more than 24 hours if possible. The good thing about Louisville—and downtown especially—is that if you get deep enough, you are hitting part of that Ohio River alluvial soil, which is very sandy. You can send as much water to it as you want to. The plants are designed to take up water, the garden is designed to infiltrate water, and if you get enough rain, there’s an emergency overflow back to the sewer system so that it won’t flood.”

The German-Paristown Neighborhood Association agreed to maintain the rain garden, cutting it back in the winter and watching for invasive species and weeds. “Maintenance at first involves watering the plants until they’re established so they can then handle the rainwater themselves,” Sydnor said. “When you get to a point where it’s established, you don’t need to water it as much. That’s the beauty of native plants is that they are inherently designed to absorb a lot of water and be drought resistant. And they also do a good job of blocking out weeds once they are mature.”

“It’s a responsibility that we took on,” Steve Magre, the area’s Metro Councilperson, told Broken Sidewalk. “The goal is to create two to three teams of six people that will help maintain the property.” As younger people and families move into the neighborhood, Magre said he has seen the area turn into a walking community. The rain garden, he added, is a place to stop and take a look around.

For Sydnor, that collaborative side of the project was one of its major victories. “To me this was a great project because we were able to solve multiple problems with the project and we had community buy-in,” Sydnor said. “It’s an example of how if you work with a neighborhood and the surrounding community throughout the process and get a product they will like and accept—that they have ownership over—it’s a positive example of what we can do in other places.” This intersection is an exceptional case where Metro Louisville, the neighborhood, and MSD all came together to improve a streetscape and solve multiple problems at once—pedestrian safety, stormwater runoff, lessening the heat-island effect, and general aesthetics.

The total cost of the Germantown garden, which opened in 2012, was $91,000, with funds coming mostly from the sewer district. Additional support came from the Metro Council district, then headed by the late Jim King. That ended up being a great bargain for MSD. Sydnor said the garden reduces the volume of water that would have gone to the sewer by 1.2 million gallons a year. “The way we assessed it, it comes out to $.06 per gallon captured,” he said. “If you look at a basin project, it’s going to be three or four times that same metric. It’s very efficient.”

Sydnor believes rain gardens can help solve Louisville’s larger issues with rainwater runoff with larger-scale implementation. “I think it’s very applicable to the rest of the city,” he said. “Whenever you have an intersection, you’ll notice the [sewer] inlets—especially downtown. Basically all that water when it rains goes to the combined sewer system. It doesn’t necessarily have to be in the middle of the intersection. There are opportunities on the side of the road or on private property where you have roof drainage.”

While there’s ample room for including these amenities in the public realm, Sydnor said most of the city’s new rain gardens are on private property. MSD has incentive programs for private property owners interested in rain gardens like this one in Germantown on their own land. (Find out more here.) “We’ve had 117 of those projects come through in the past 5 years, worth about $50 million,” he said.

There are a number of public realm projects currently in the works as well, such as streetscapes improvements along Preston Street, Oak Street, West Market Street, East Market Street, and East Main Street.

“It sort of evolved from the time since we did this project in Germantown, that this is becoming more the standard,” Sydnor said. “If you go to a city like Portland, Oregon, it’s a standard component of their roadway work to incorporate vegetation, rain controls, bumpouts, that sort of thing. We’re evolving to the point where that’s going to be the case here.”