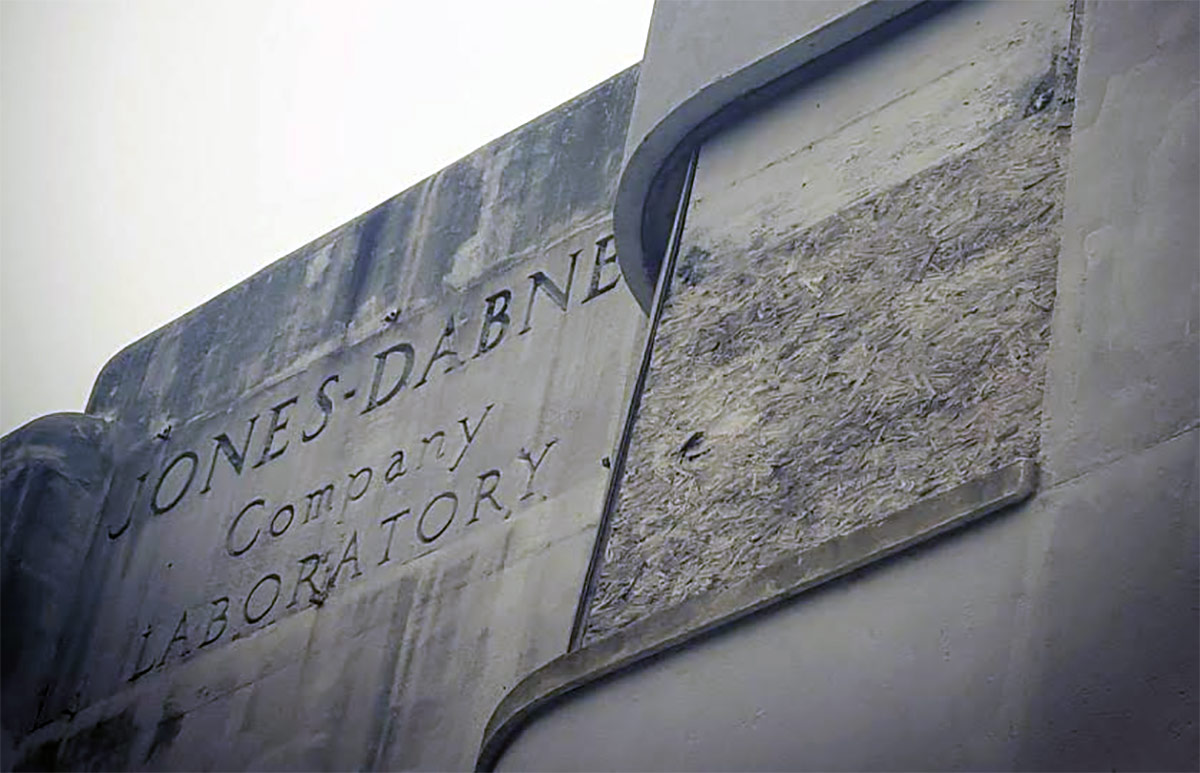 Louisville’s preservation community expressed cautious optimism this month with news of the proposed restoration and reuse of the iconic Schenley (née Bernheim) Distillery Building at 822 South 15th Street. Part of the otherwise contentious STAR BioEnergy anaerobic digester proposal, the vacant building adjacent to the Heaven Hill Distillery in the California neighborhood, was included as a component of the $5 million community investment package offered to the surrounding neighborhoods. This agreement includes transfer of the historic structure to Simmons College and Kentucky State University, with the remaining funds applied toward community initiatives.

As these high-profile negotiations continue, just blocks away another example of Art Moderne architecture in Louisville has found itself in the news. Hiding in plain sight for over a decade, just a mile or so south of the STAR BioEnergy site, is the abandoned Jones-Dabney Varnish Company building near 11th Street and Hill Streets on the border of the Park Hill and Algonquin neighborhoods.

Standing alone in a desolate brownfield site that was most recently the home of French chemical company Rhodia SA, it’s the last significant holdout on a 17-acre site purchased by Metro Louisville in 2002 for $1 million. The rest of the site was cleared of its numerous brick and concrete industrial buildings soon thereafter.

Still, this little Art Deco gem remains. Far smaller than its cousin at Heaven Hill, this building actually predates the Schenley by about two years, having been constructed in 1935. Yet, despite its diminutive size, the Jones-Dabney still packs some architectural punch.

It’s a rare example of the Art Moderne variant of Art Deco, popular in its era. The unique facade, hard to miss despite the graffiti-laced whitewash and warped plywood, is notable for a streamlined profile, curved corners and accents, and horizontally-oriented windows.

As little construction was undertaken during the years of the Great Depression, Louisville claims just a handful of these historic structures. Even more noteworthy in this case is the suggestion that the Jones-Dabney might be the very first site-built, slip-form poured concrete building in the United States.

Thus, it lent a modern face to its firm in a city that had become a major hub for paint and varnish manufacture, with more than 30 firms reportedly operating here at the time.

As such, as early as three years after its founding, Jones-Dabney was acquired by a larger national firm, Devoe & Raynolds. With this acquisition, an important modern-day connection was made with Gil Holland’s emerging Portland Warehouse District, from which Devoe & Raynolds also had a major presence among the now-iconic four- and five-story brick warehouses.

Those Portland warehouses, having been utilized or otherwise left untouched over the ensuing decades, are now on track to become a notable feature of Downtown and Waterfront Park’s coming flurry of westward expansion.

But back down in today’s quieter Park Hill and Algonquin, where such a renaissance is less likely, might there still be possibilities for the Jones-Dabney?

Both it and the Schenley were deemed eligible for listing on the National Register of Historic Places (NRHP) in 1983, as part of a larger West Louisville landmarking effort. And while the Schenley was listed, due to owner objection, the Jones-Dabney building was not.

Of course, NRHP listing is no guarantee of preservation, as Louisville has been reminded time and time again. Witness the ongoing Water Company block demolition Downtown. Not even an appeal from the National Trust itself was able to prevent a (near) total loss.

The fate of the Jones-Dabney, too, has been called into question recently, with a WDRB Sunday Edition report by Marcus Green published November 13th.

According to the story, the city’s grand vision for the Park Hill industrial corridor, of which the larger Jones-Dabney (Rhodia) site is part, largely has come up short. With the aim of reinvigorating this development plan, Metro now has secured grant money sufficient to completely clear the 17-acre site, causing alarm that the Jones-Dabney might be bulldozed in the process.

In the article, Theresa Zawacki, senior policy advisor to Louisville Forward, discussed Metro’s renewed efforts to market the parcel. The city points to the property as the largest light industrial infill site available in the center city and hopes its redevelopment will create needed jobs in the distressed neighborhood.

I had the opportunity to tour the site with Zawacki. Interestingly, Louisville Forward has long recognized the significance of the Jones-Dabney building, and has made genuine effort toward its reuse. After having been intentionally left standing, the structure subsequently has been made a noteworthy component of a handful of redevelopment proposals. Use as a gatehouse, as an employee center, or as a main office building, have been suggested and even designed.

And yet, nothing has come to fruition. The building itself, while not a deal-breaker, has proved to be a hindrance from a developer’s perspective. Zawacki noted that the odd shape of the 17-acre site itself creates challenges for designing a standard, modern industrial site. The specific placement of the historic building adds further complication.

While the parcel is large enough for 250,000 square feet of warehouse space (or about ¼ the size of Amazon’s River Ridge facility), 100 employee parking spots at the northern end, and 25 loading docks along 11th, no proposals have been deemed workable—with the Jones-Dabney in place.

Now, with the impending clearance of the multiple remaining foundations and cinderblock structures on the site, Metro plans to issue an RFP (Request For Proposal) for the redevelopment of this brownfield. Zawacki, whose background is in law and urban planning, and who quite clearly is an admirer of the Jones-Dabney, did suggest that an option may exist to carve-out the building from any new proposal.

Still, there’s no doubt that this solid little structure is now in a precarious little spot.

So here, then, may lie an opportunity, of sorts. A chance for advocates to engage in more proactive calls for preservation. At a time prior to having a specific proposal on the table. At a moment before any dealing has begun. Before the demo clock starts ticking.

So, let’s imagine a bright future for the Jones-Dabney.

Eleventh & Hill is nothing more than a desolate moonscape in present day. But a quick glimpse at the map shows its strategic location. Just one block east is Old Louisville, and the rapidly expanding Belknap Campus. Within sight, due east of the Jones-Dabney, is the Bellamy student housing, parking in the repurposed American-Standard building on Seventh Street, and just beyond that is The Province student apartments. Alas, the physical and visual barrier created by the CSX railroad tracks across both Hill and Seventh may preclude any meaningful connection to the university.

But right across the street, to the west, is the 637-unit barracks-style Parkway Place, itself built in 1943. Louisville Metro Housing Authority (LMHA) indicates it will remain in place for the foreseeable future, but eventually it will be redeveloped—similar to the Clarksdale Homes and Sheppard Square, and soon Beecher Terrace.

Could the Jones-Dabney building be part of this eventual public housing redevelopment? Could it become a community center? A co-op workspace? A health clinic? An early childhood center? Even affordable housing, itself?

No matter its specific mode of reuse, however, one point is crystal clear: the Jones-Dabney should not be demolished. The 2009 Park Hill Industrial Corridor plan already has compromised many of its own goals due to needless demolition—most notably its cornerstone building, the old Philip Morris factory at 18th Street & Broadway. That five-story, brick-and-heavy-timber structure was destroyed several years ago for a YMCA whose future is, at best, tentative.

Unfortunate decisions like this have been made, over and again, for decades. And just recently, with dismaying frequency, Louisville’s top leadership has actively chosen to disregard the economic and cultural value of pragmatic preservation and thoughtful planning in the heart of Downtown.

Here, then, is a chance for Metro to demonstrate a newfound interest in engaging the community in conversation about these issues. Here, also, is a chance for Louisville’s sometimes-fractured and often-frustrated preservation and planning community to collaborate and constructively promote vibrant and thoughtful growth.

The Jones-Dabney has much more to give to Park Hill and Algonquin, as so many other neglected structures do to greater Louisville as a whole. Let’s make a new start—for this building, and for the greater cause of responsibly building and thoughtfully preserving our city.