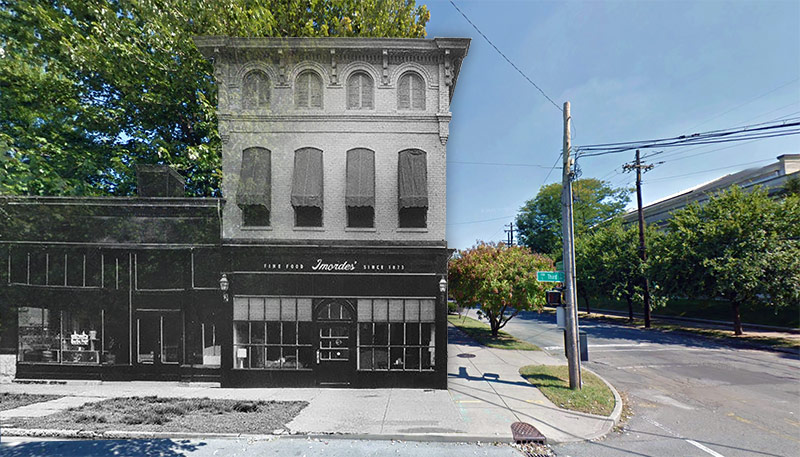 Three corners on the intersection of Third Street and Ormsby Avenue in Old Louisville look a lot like they did a century ago. On the west side, two stately Victorian houses watch over wide tree-lined sidewalks. On the southeast corner, the First Church Christ Scientist takes the form of a Classical stone temple.

But on the northeast corner, there’s nothing. A lot of nothing. In fact, roughly half the entire block is dedicated to surface level parking lots surrounding a somewhat-out-of-place slab residential tower built sometime in the 1970s. Today’s Hillebrand House senior housing stands 16-stories tall—about 210 feet—and contains 238 apartments. That’s a big dose of density but it’s a tower in a parking lot, which serves to deaden the urban experience.

That, of course, wasn’t always the case. This stretch of parking lots facing Third Street was once lined with a variety of stately houses and ornate commercial buildings typical of the area. The two-and-a-half story building we’re looking at today—originally Imorde Brothers’ Grocery in the late 19th century and later Imorde’s Restaurant—sits on another parking lot today owned by the Filson Historical Society. We spotted the building on the Back in the Good Old Days Facebook page, where many recalled the old restaurant as a neighborhood staple serving Louisville’s own Benedictine sandwiches. Among the comments:

Another commenter noted that the building burned in 1973, but I couldn’t find any more information on why the structure was torn down. Please share your memories or additional info in the comments below. The Old Louisville Guide website had this to say about the building:

This was later the site of Imorde’s Restaurant (pronounced Ah-mord-ee), a popular deli-style restaurant which finally closed in 1973. It was especially known for its Sunday brunch. The restaurant was also famous for its soups and known for serving the best Benedictine in town (no doubt the family knew Jennie Benedict personally as she lived only a couple of doors down).

Another notable house at 1323 South Third Street was designed in the Richardsonian Romanesque style popular in the 1870s. Take a look at that longgone-structure below: