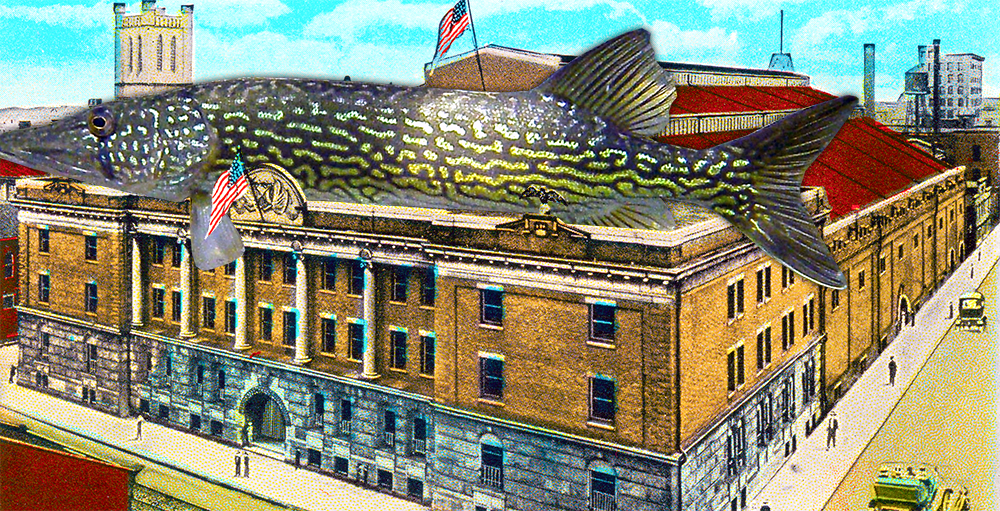 Mooneye, shortnose redhorse, arrow darter, lake sturgeon, burbot, and grass pickerel. What do these have in common? Each of them names an animal—a fish—that, right now, swims in the great muddied, currently swollen mass of water slipping past us here in Louisville. Not all of them are to be found in the McAlpine Pool above the dam by Downtown, but we are connected to each by countless miles of continuous river channels, streams, creeks, and backwaters.

When I think of Louisville I think of the Ohio River. While our city has done much to embrace our waterfront over the past several years, I’d like to see a deeper connection both acknowledged and fostered. Of the proposals for the old Louisville Armory, building an aquarium is the one that instantly grabbed my imagination. I think we should build an Ohio River aquarium here in Louisville. An Ohio River Aquarium would enhance our reputation as the River City, be a unique one-of-a-kind aquarium attraction, promote knowledge of and pride in our local ecological heritage, and be an invaluable resource for conservation.

Aquariums can be wonderful places that attract both the young and old year round but there are already several aquariums within a day’s drive of Louisville and one right up the road in Cincinnati. Most of our current aquariums, however, focus on traditional exhibits. Though many have opened exhibits of American fish, the primary focus seems to be on tropical freshwater species and coral reef tanks featuring the largest sharks the aquarium can manage. Don’t get me wrong, sharks are awesome and I’ve personally been obsessed with them since I was four, but there are over 30,000 species of fish in the world. I believe an opportunity exists to create a new aquarium experience constructed around one ecosystem and showcasing under-appreciated yet still fascinating and gorgeous species. Louisville doesn’t need another standard aquarium but something as unique and bold as an Ohio River aquarium could be a tremendous asset to our city. I anticipate numerous questions in response to this proposal. Allow me to answer a few below.

Is one North American River really worth dedicating an entire aquarium to?

The Ohio River is more than deserving. With over 150 fish species in the main river channel and 350 in the drainage (plus 120 different mussels) there is absolutely enough variety both from a species and ecosystem/habitat standpoint to create numerous distinct exhibits. You may also wonder if our local fish are worth looking at. I’m aware of a strong perception that freshwater fish are bland and uninteresting. Nothing could be further from the truth. Our local fish come in bizarre shapes, gaudy colors, a wide range in sizes up to 6 feet long, and unusual life histories. Some are solitary ambush hunters, some roam open water in search of food, others dig in sediment, while still others travel in large glistening schools that we would more commonly associate with ocean fish. Carefully crafted exhibits could give a genuine feel for the different ecosystems encountered from the headwaters to the main river, allowing Louisvillians and our visitors a cohesive and immersive experience of the Ohio River watershed.

Aquariums and zoos have at their heart an educational focus; is the Ohio River worth learning this much about?

Ask yourself, how much do you know about life below the surface of our waterways? What do things look like? How much do our children know about it? The Ohio River and its tributaries comprise a phenomenal ecosystem, one that is part of our ecological, cultural, and economic heritage. It’s also an ecosystem under intense pressure from habitat destruction, altered flow regimes, pollution, overharvesting, and disruptive non-native species. Numerous species are absent from large portions of their historic ranges of officially endangered. We all use the Ohio, whether for recreation, sport, transportation, or sustenance as drinking water. A healthy river benefits us all and education is the first step in conservation. Beyond that, it is the dominant feature of our hometown. While our appreciation for the river has grown in recent years I don’t think we really grasp the potential richness of experience it could offer.

And finally, why the old Louisville Armory?

To that I answer, why not? One thing you can’t say about the Louisville Gardens, which is the name I knew it by as a kid, is that it hasn’t been a versatile space. I’ve been in the Gardens three times. The first was in middle school to watch an unsettling interactive performance of The Velveteen Rabbit in an upstairs room, the second as a player in the Louisville Invitational Basketball Tournament, and the last for my high school graduation. An aquarium dedicated to a big river is hard to picture without an enormous donut-shaped tank with circulating water to simulate the main river channel and house all the great fish that swim there. The large arena space would lend itself well to such an exhibit. As for the location, while the most obvious place to put an aquarium is directly overlooking the nearest body of water I think the location of the Louisville Armory makes its own statement. The Ohio River really does run through the heart of Louisville, so much so that the aquarium built for it doesn’t need to be pushed off on the edge of town. The Ohio River Aquarium belongs just as much on the corner of Sixth Street and Muhammad Ali Boulevard as it does in Waterfront Park.

Is the construction of a state-of-the-art aquarium in the old Louisville Armory a lofty goal?

Absolutely, but I think much of what gives Louisville its special character is that it offers unique experiences that you can’t quite duplicate in a similar city. This would further strengthen our city’s unique vibe and identity. And perhaps creative ways could be found to increase revenue. While a museum restaurant is a classic move, a 21C-style hotel with fish tanks for room walls would be a novel offering. If the aquarium found needed roles to fill in conservation and research perhaps it could be the recipient of academic or federal funding.

Since I was a kid I’ve had a dream of creating an aquarium that would share, celebrate, and bring to light Louisville’s greatest heritage and intangible resource. So many mysteries lie beneath the surface of water. When it comes to the water in our proverbial front yard, I think it’s time we gave ourselves, and the world, a window to look in.