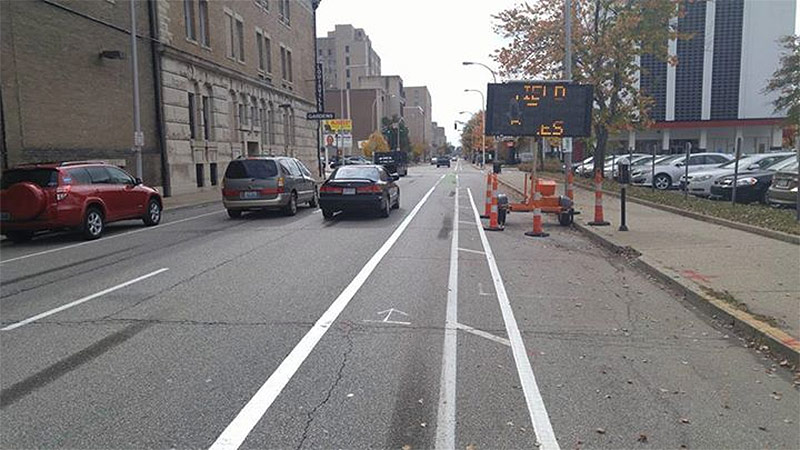 Despite a mishap here or there, the new bike lane along Sixth Street through Downtown Louisville and neighborhoods south has been open a couple weeks now. But as the lane begins to meld with the city’s built landscape, let’s consider how the city has approached the lane and its strange green markings.

For instance, WDRB’s report on the new lane began like this: “If you drove through downtown Louisville on Wednesday, you may have noticed something new on the street – bright green paint.” Keyword: “drove.”

We don’t mean to single out WDRB for its “windshield perspective” on writing—virtually every major news source in the city does the same thing. What it illustrates, however, is that Louisville is still very much a car city. We can’t even get one sentence into a story about bike lanes without invoking the automobile.

And to be fair, there’s a definite need to educate motorists about what the paint means—what bike lanes in general mean—but the overwhelming assumption it makes is that the green paint is something to be observed from behind the wheel.

This kind of thing happens all the time, often in subtle ways. Think about how often someone frames a discussion, like in this case, around driving. Think about how nearly any time any development is proposed, the biggest issues are about parking. Consider how for most events, organizers share driving directions and where to park, but have no information about transit, cycling, or walking.

Many times, when we see a report about a crash on a local street, the main point of the story is to relay how the incident is affecting traffic, not whether the people involved are okay or why our unsafe streets are causing such traffic violence.

This point is part of a larger discussion we’ve been having about the way we talk and the way our streets are designed. We’ve gone over blaming the victim, the difference between a crash and an accident, and how subtle things like this transformed our streets from places for people to places only for cars.

If we want to make streets for everyone, it’s important to talk about them in those terms.

One other takeaway from WDRB’s report: the green paint treatment will be the exception, not the rule, in Louisville.

“We don’t want to overuse the green and put it everywhere you have bike facilities because then people desensitize to it, they don’t pay attention to it,” Harold Adams, spokesperson for Louisville Metro Public Works, told WDRB.