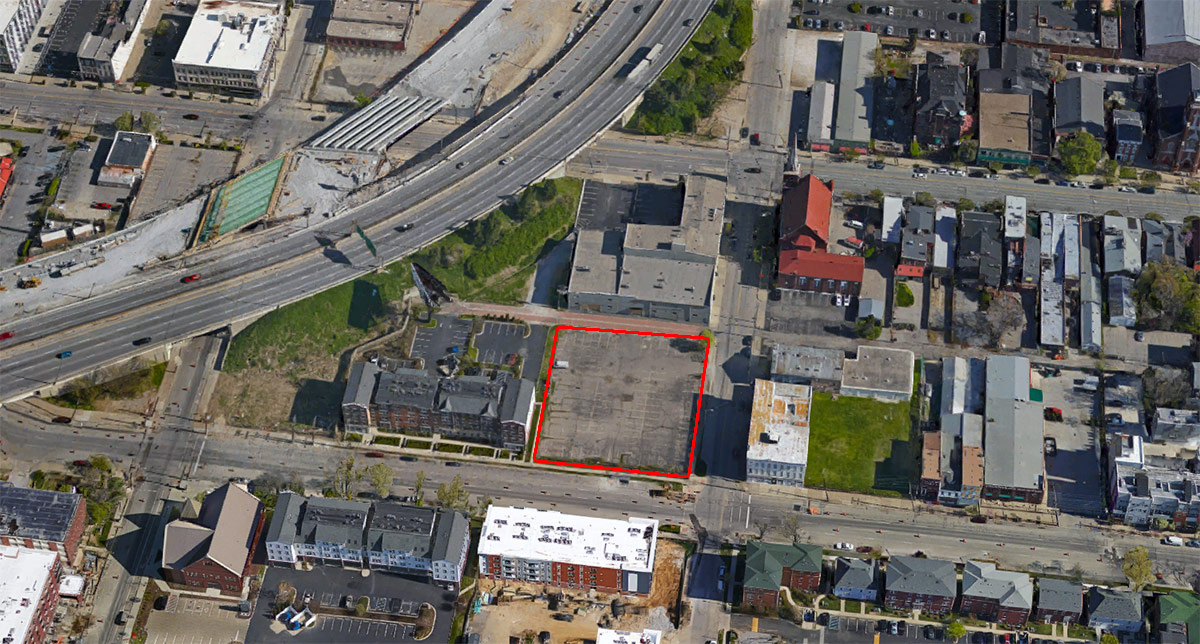 In a few months, a five-story Home2Suites hotel by Hilton will begin rising on the corner of Jefferson Street and Hancock Street in Nulu. Several tipsters have reported in the past few days that crews were on site digging around, so we checked in with Bill Weyland, managing partner at developer City Properties Group, to get the latest.

“We have gotten in the ground to do some soils analysis,” Bill Weyland told Broken Sidewalk yesterday. “As you can imagine, there’s a bunch of old remnants of buildings—foundation walls and things.” He noted that the work is preliminary and isn’t actually construction. Rather, it will help engineers finalize the building’s foundation plan.

The design of the 100-room Home2Suites follows in line with Hilton’s standard look for the hotel chain. The bulk of the hotel faces Hancock Street, which helps with Weyland’s efforts to bridge the gap between East Market Street and areas to the south. It also allows for unloading on the quieter of the two streets. A parking lot is shown to the west of the hotel along Jefferson Street. No retail is planned in the building. The hotel also includes an indoor pool.

City Properties Group expects the hotel to cater to both patients at the Medical Center to the south and visitors to Nulu. The company is working with First Hospitality Group of Chicago on the project. The same duo partnered on the Hilton Garden Inn at Fourth and Chestnut streets.

“We’ve been really working on that and the Louisville Chemical Building to roll them forward at the same time,” Weyland said. “Both those projects have layers of complication. The hotel on the soils side and Louisville  chem from the environmental side.

The Louisville Chemical Building will be rebranded as the Lofts on Hancock and will house 12 apartments and three retail spots. You can read more about that project and catch our interview with Weyland on why improving Nulu’s walkability is key to its future here.

Weyland said both projects should be under construction by the beginning of October. If all goes as planned, construction will wrap up by the end of next summer. “We’ll have a more accurate construction schedule after we verify the issues we’ve got now,” he noted.