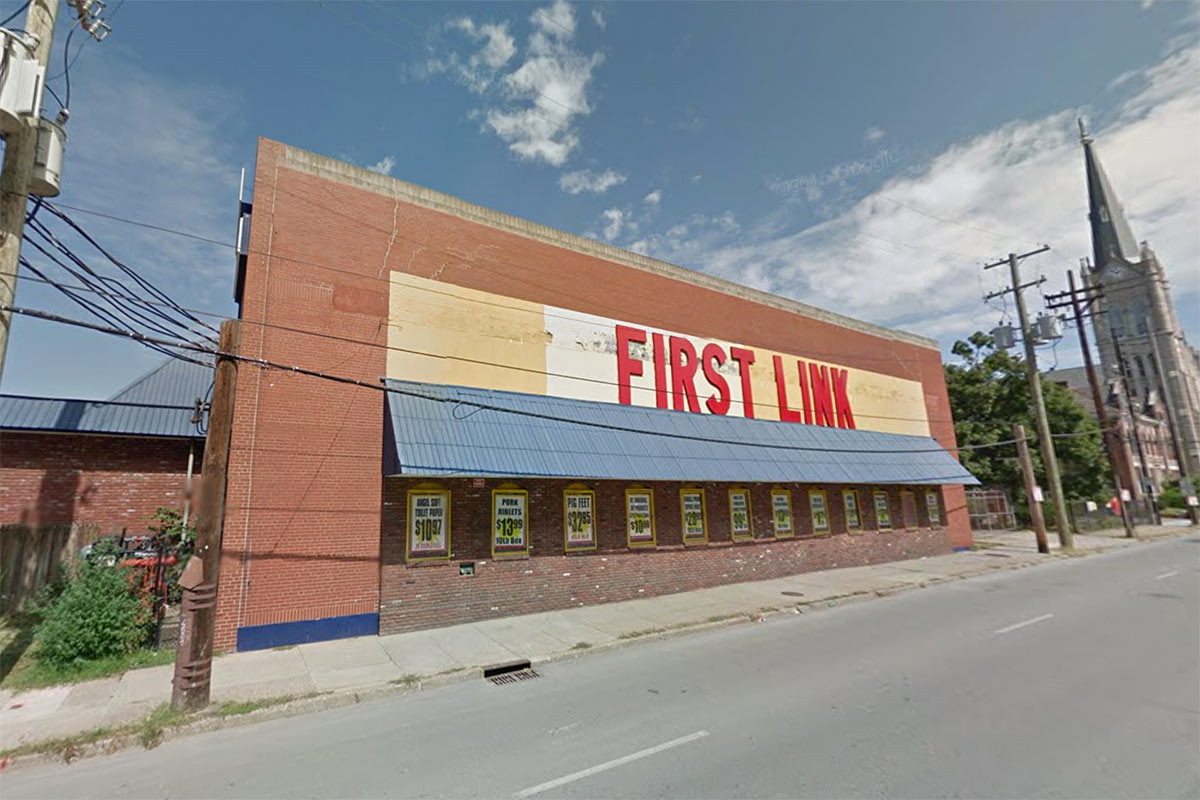 For a couple years, Downtown Louisville will be without any kind of grocery store. Business First‘s Marty Finley reports that the 73-year-old First Link Supermarket, located at 431 East Liberty Street, will soon be shut down and auctioned.

The Art Deco structure, once part of the massive Frank Fehr Brewery located in the area, covers some 47,000 square feet, with 20,000 square feet on the ground floor of the original grocery building. A strip mall–style retail piece set far off Liberty includes another 4,500 square feet.

The enormous basement, below the grocery, includes a USDA-approved meat processing plant covering about 18,000 square feet of refrigerated space—a relic of the building’s old brewery days. The entire parcel is 1.44 acres, but that also includes a large parking lot.

According to a press release cited by Finley, Bill Silverman and his son, Bernard Silverman, opened the grocery store in 1943 with a humble 600 square feet inside a local home. The store then moved to a commercial space at Shelby Street and Market Street, seen above. That building burned in 1986 and First Link moved to its present site on Liberty Street.

The First Link property is older than it looks, dating to sometime in the late 1930s or early 1940s. While the facade of First Link along Liberty Street has been bricked up and windowless for some time, the original facade, above, featured large expanses of glass, including a layer of glass admitting light to the basement. A rounded aluminum overhang added to the structure’s Streamline Moderne Art Deco aesthetic.

The structure was built by the Frank Fehr Brewing Company and clearly was an effort to modernize its eclectic collection of historic buildings, long demolished for parking lots and the Dosker Manor homes. Another sleek, modern structure approximately three stories tall once stood across from the First Link site, standing in stark contrast with the older architecture.

Directly west of the First Link grocery, where its parking lot sits, once stood another Frank Fehr building of similar height, but much older and much more ornate. That structure featured six dramatic arches of brick and stone.

Finley reported previously that the property was listed for sale when Bernard Silverman became ill, and his son, Bruce Silverman, who had worked at the store for 40 years, had opted not to keep the operation following his father’s death.

The First Link property will be auctioned at 10:00a.m. on Wednesday, May 18, Finley writes. Finley said a press release announcing the closure specified no closing date for the grocery, but did say the First Link Discount Liquor Store would be open until the auction is complete. For more information on the auction, click here.

Six blocks west of the First Link site, some sort of grocery or “urban market” is planned at the corner of Third Street inside the Omni Louisville Hotel, which is slated to open in 2018. That market will be operated by Omni.