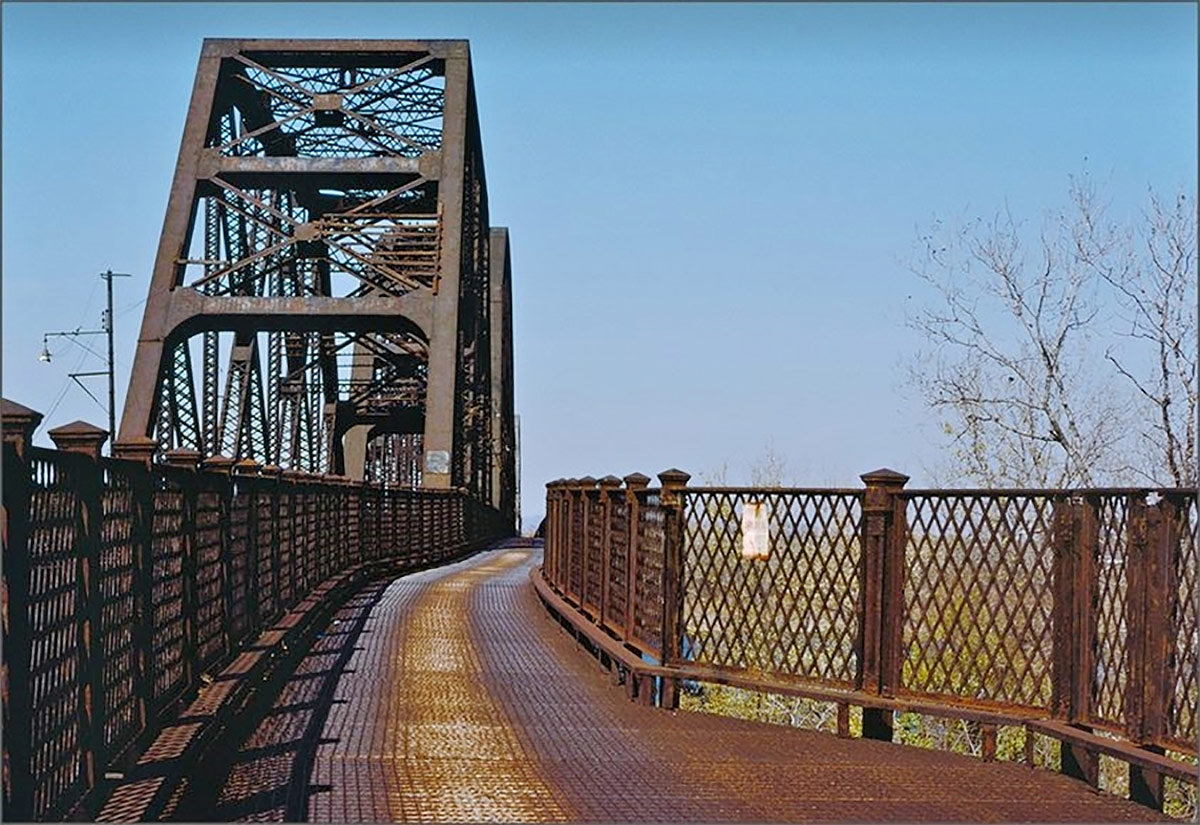 It’s no secret that the conversion of the Big Four Bridge into a pedestrian and cyclist crossing over the Ohio River is a huge success. Just glance at your Instagram feed, and you’ll notice just how many views of Louisville are taken from the bridge. Crowds flock to Waterfront Park to climb its signature spiral approach ramps and cross over to Jeffersonville where a new park and a number of new businesses have set up shop around the bridge.

Could history repeat itself downriver with another bridge conversion?

There’s an opportunity to create a shared-use path for cyclists and pedestrians along the Kentucky & Indiana (K&I) Bridge linking Louisville’s Portland neighborhood with the flourishing New Albany. A group of dedicated leaders from Kentucky and Indiana has been steadily pushing to open a former automobile lane closed in the ’70s on the bridge to create a 13-mile waterfront loop between the K&I and its Big Four counterpart.

Those efforts are picking up steam, according to Marcus Green’s recent report at WDRB.

“Greater Louisville Inc. [the city’s chamber of commerce] is making a new push to highlight the bridge’s role in completing an urban trail system that ‘has the potential to become truly regional,'” Green wrote. That organization has listed opening the bridge among its legislative priorities for 2016.

The decade-long effort has, until now, been stymied by bridge owner Norfolk Southern Corporation, which says it won’t open the extra lane due to safety concerns.

The railroad company maintains that the move could endanger people crossing the bridge or create liabilities for the company. “Norfolk Southern’s K & I Bridge exists today for a single purpose—to provide safe transport for freight trains over the Ohio River,” Norfolk Southern spokesperson Dave Pidgeon told Green in a statement. “We not only have safety concerns about public access along active right-of-way but also serious, prohibitive concerns about security and liability.” He added that trains traversing the line carry “both hazmat and non-hazmat cargo.”

Green reported that “despite the railroad’s concern, laws in Kentucky and Indiana generally protect property owners if someone is injured while using a recreational trail.” He added that Norfolk Southern and other railroad companies operate similar trails next to active rail lines in other states.

Citing a report by the Rails-to-Trails Conservancy, Green reported on a remarkably similar conversion project in Memphis, Tenn., where the Harahan Bridge over the Mississippi River will open this year with a pedestrian and cyclist lane next to an active Union Pacific Railroad line.

Green went on to note that Norfolk Southern itself operates seven rail lines next to shared-use trails, including one along the Schuylkill River in Philadelphia.

In both cases, the shared-use trail is separated from the rail line by a fence.

Louisville could do the same thing. And affordably. David Karem, president of the Waterfront Development Corporation, told Green that because the bridge already has approach ramps on both sides of the river, infrastructure costs would be greatly reduced.

But Karem added that efforts to date have been met with “complete resistance” despite a powerful list of supporters.

Even with threats of using eminent domain to acquire an easement along the bridge, Norfolk Southern has yet to budge on its position. But Louisville is pressing on.

“In my mind, there’s no question but ultimately that bridge is going to be used for pedestrian (and) bicycle connection,” Karem told Green. “I just think it’s so utterly logical and there’s so much momentum going in that direction. There’s got to be a way.”

Read Green’s full report on efforts to convert the K&I Bridge over at WDRB.

[Top image of the K&I Bridge circa 1987 found on the Historic Louisville / Weebly site.]