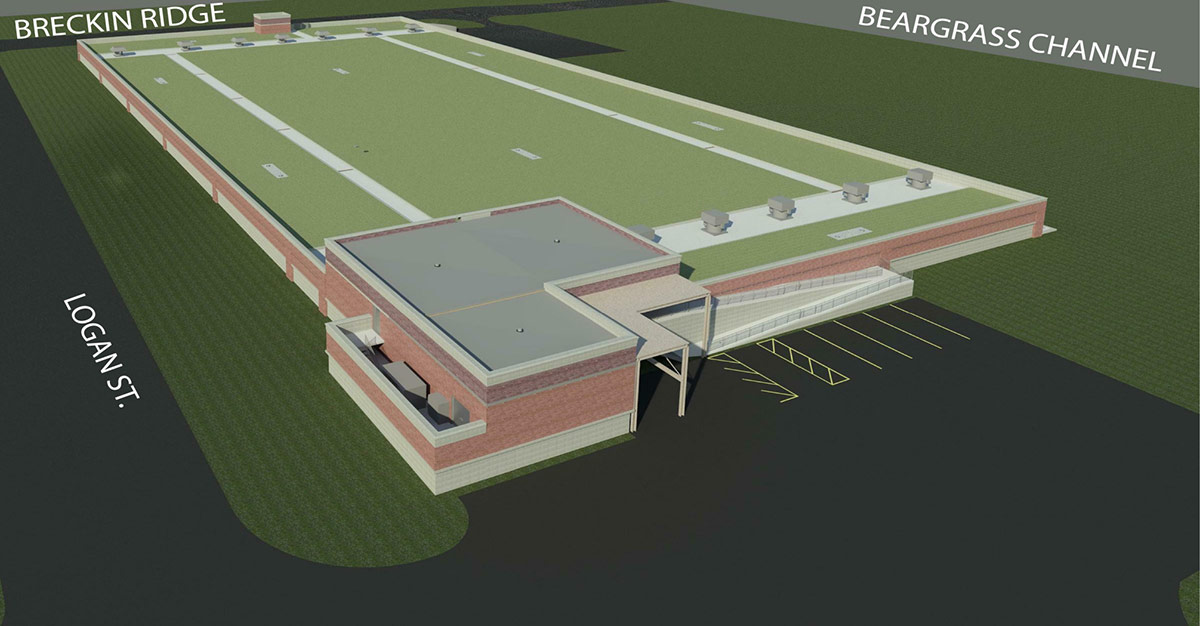 Smoketown’s efforts to advocate for a change in the basin design of the Logan CSO Interceptor Project took major steps forward last week. For the Smoketown community, this is a crucial issue of environmental, racial, and economic justice. At stake is whether the community will be blighted by a structure covering a city block built by the Metropolitan Sewer District (MSD) or whether MSD will bury its facility and provide much-needed green space to the Smoketown community above its facility.

The Logan CSO Interceptor is one of a dozen basins MSD is constructing around Louisville to capture Combined Sewer Overflows (CSOs) during heavy rain events. These basins are part of MSD’s effort to comply with a consent decree it entered into with the EPA to reduce pollution of the Ohio River.

At every other site where it is environmentally feasible to bury the basin below ground, MSD is doing just that.

However, MSD designed the Smoketown basin first, and—by its own admission—failed to do the outreach necessary to get community input and engagement in Smoketown. It designed the Smoketown facility as a block-long, windowless brick structure. This, instead of the green space being provided to other neighborhoods above the CSO facilities.

For more information on the history of the project and the design, you can read the Smoketown community’s letter to MSD it delivered last week, copied in full below.

MSD scheduled a meeting last Wednesday to design the facade of the block-long building. At that meeting, Rev. Bruce Williams of Bates Memorial Baptist Church spoke for ten minutes about the history of the project and why he would refuse to participate in the design of the facade.

It was a remarkable statement on behalf of the neighborhood and, following his remarks, over a hundred people walked out of the meeting. As Rev. Williams’s said, this building is an insult to Smoketown and “you cannot decorate an insult.”

Here is the video of Rev. Williams’s speech:

Led by Rev. Williams, residents, business owners, advocates, and allies met the following day. From that meeting, we have written a letter to MSD inviting its Executive Director and Board to another community meeting to “outline a process going forward in which MSD and the Smoketown neighborhood can work together to ensure that the Logan CSO Interceptor Project is a) completed in a timely manner and b) constructed in a way that treats the Smoketown neighborhood with the same respect and dignity provided to the other neighborhoods in which you are constructing CSO projects”.

It is our hope that from Wednesday’s meeting, MSD leadership will commit to redesign the Logan CSO Interceptor Project now, before it is too late.

Above: Broken Sidewalk spoke with residents about the CSO Basin and blasting that is causing problems in the neighborhood. Read the full story here.

What can you do to help?

So, what can you do to help Smoketown get the same treatment as other communities?

Here is the full letter to MSD

Dear Executive Director Parrott and the MSD Board,

It is our hope that after this meeting you will commit to:

While for MSD the Logan CSO Interceptor Project may only be one step in complying with the Consent Decree it entered into with the Environmental Protection Agency, for us, this is an issue of environmental justice, of racial justice, and economic justice. You plan to build a windowless, block-long building in our community while planning to build underground structures in other communities around Louisville in which it is environmentally feasible and to provide those communities with much-needed green space above the structure.

The disparity in your plans for Smoketown and other Louisville neighborhoods is unjust and unacceptable. It is not too late to make it right and we want to work with you in that effort.

How we got here

At a community meeting on November 16 at Coke Memorial Baptist Church, Smoketown residents, businesspeople, and allies gathered to hear from MSD’s Executive Director Tony Parrott. Mr. Parrott, responding to the dissatisfaction from Smoketown residents, admitted that the Logan project “did not have a good rollout” and lacked “community engagement”. The Logan CSO Interceptor was the the first of the twelve CSO structures to be designed and built, Mr. Parrott explained, and he apologized for not developing good partnerships with Louisville Metro and for failing to get community input at the outset on the design of the building.

During the course of the meeting, we learned that after receiving input from other neighborhoods on their CSO Interceptor projects, MSD decided to bury each of the other 11 structures at grade1. It was clear from the comments made by neighbors at the Smoketown meeting that an at-grade structure was their preferred design, as well. MSD had studied the possibility of doing this for the Logan CSO Interceptor project and determined that burying the facility at grade would have cost an additional $4,000,000.

As a concession to the neighborhood, MSD offered the Smoketown community the opportunity to weigh in on the design of the facade of the building. MSD explained that it would agree to allow the community to spend $700,000 that was previously budgeted for bricks on some alternative facade of which the community approves.

On January 28, 2016, community members met with De Leon & Primmer, the architects hired by MSD to revise MSD’s plans for the Logan CSO Project. The overwhelming consensus at that meeting (like at the November 2015 meeting) was that the community was not interested in having an above-grade building on the site. Instead, we submitted to MSD several visions for the green space above an at- grade facility.

The community members hoped that MSD would review the plans generated at the January 28th meeting, recognize the injustice it was perpetrating in the Smoketown community, and amend its plans accordingly.

That is not what happened.

Instead, the next meeting MSD scheduled was the “Logan Street CSO Basin Facade Design Meeting” for this past Wednesday, March 16. At the meeting, the proposed agenda was to hear from Executive Director Parrott, review the design proposals for the facade as conceived by DeLeon and Primmer, and then break up into small groups to further discuss the architect’s proposals for the facade. In other words, the entire meeting was structured to preemptively reject this communities’ repeated demand for an at-grade facility, circumscribe the discussion to preclude the expression of any preference for an at-grade facility, and treat the construction of an above-grade facade as an inexorable truth.

As Pastor Williams said, “It’s your mistake, but we have to live with it, and I can’t accept that.” Despite hearing clearly from this community that your plans are unacceptable, you are continuing to construct an unfair building that will blight our neighborhood and stand as an insult to the Smoketown people. The neighborhood of Smoketown agreed with Pastor Williams who said, “You cannot decorate an insult” and hundreds of neighbors, businesspeople, and allies walked out of that “facade design” meeting. A link to Pastor Williams’s full comments are available at http://smoketownvoice.com This is a website we have created specifically to advocate for an at-grade basin at the Logan CSO Interceptor site.

Wednesday’s meeting was not productive. We will not participate in decorating an insult. We hope you will meet with us this Wednesday to discuss how we can go forward together in a way that simultaneously honors both MSD’s commitments under the Consent Decree and the dignity and integrity of the Smoketown neighborhood.

It’s not too late

During his comments at the March 16th meeting, Executive Director Parrott explained that the project was 35% complete and that “all of the blasting will be completed by the end of the month.”

It is not too late to alter the design of the Logan CSO Interceptor Project to bring it in line with the other CSO basins you are building in other communities around Louisville. However, we understand that time is of the essence. That’s why we hope to meet with you on Wednesday.

Will changing the design of the Logan CSO cost more money? Yes it will. From our perspective, this is a problem for MSD to solve, not the Smoketown community. Will changing the design require more workers and potentially increase the duration of the project? Almost certainly. This, again, is on MSD. MSD has already admitted that it did not do the proper community outreach and engagement in the Smoketown neighborhood when it designed this basin. MSD has admitted its process was flawed. That flawed process led to MSD to decide— without community input—to save $4,000,000 on the Logan CSO Interceptor. After it got input from other communities, it learned that its decision at the Logan site was wrong and invested in more expensive projects in the 11 other neighborhoods. Yet, MSD has not returned to Smoketown to fix its $4,000,000 mistake.

We want to work with MSD to make the Logan CSO Interceptor Project work for both MSD and the Smoketown neighborhood. Please join us at on March 23 at 6 p.m. at Bates Memorial Baptist Church. From there, we hope you will commit to seek board approval on a resolution to build an at-grade basin in Smoketown on March 28th. Then, on March 31st, we can meet again to chart our way forward so that the community can quickly approve preliminary and final plans for the revised project. We know you have work to do under the Consent Decree. We are committed to working with you to fix this project quickly.

I hope it is clear from the community’s actions on Wednesday that we will not accept an above‐grade facility in Smoketown. Not when an at-grade facility is possible and while MSD is constructing at-grade facilities in other neighborhoods across Louisville. Because time is of the essence, we will need to see positive steps from MSD in the coming weeks that communicate clearly to this community that it has heard our voices and is going to change the design of the Logan CSO Interceptor Project. These positive steps include, at minimum,

If we do not see these positive steps from MSD, we are preparing to insist on the design changes through direct action, political engagement, litigation, community education, protest, and activism.

This is not our preferred path. We would prefer to work in concert with MSD and create a win‐win outcome for our neighborhood and MSD. Please call Bates Memorial Baptist Church (502-636-0523) and let us know if we can expect you at our community meeting next Wednesday. We look forward to welcoming you then and working with you during this redesign process.

1 The only other CSO being built above-grade is the Butchertown CSO. It is our understanding that because of the Butchertown site, it is not environmentally feasible to bury the facility below grade. We know that these environmental limitations do not exist at the Smoketown site because MSD has admitted to reviewing and rejecting proposals for an at-grade facility at Smoketown based on the additional $4,000,000 cost projections.