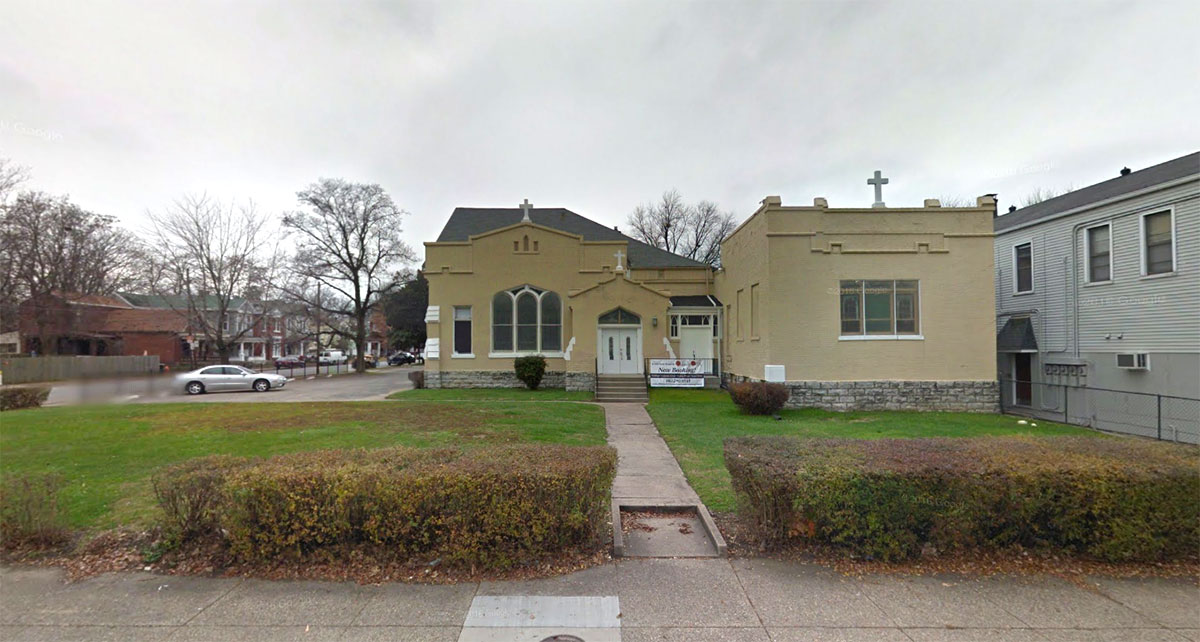 There’s been a lot of news about churches in Louisville, recently. Whether they’re getting fixed up, figuring out new ways to deal with old buildings, or being repurposed into apartments, offices, mixed-use, or coworking space, the church is the proving to be a divine typology for redevelopment.

Here’s another church conversion to add to the list. Over in Shelby Park, a small, unassuming church at 729 East St. Catherine Street on the corner of Shelby Street has been transformed into an events space called The St. Catherine.

According to a report by Business First‘s Marty Finley, the 6,500-square-foot property was purchased and renovated by Head First Media in 2013. Since then, over $100,000 has been invested in the church’s restoration, including new plumbing and electrical systems. The media production company, co-owned  by Jeff Epperson and Jeffrey Hutchins, still keeps its headquarters in the structure.

Michaelis Events, owned by Denise Jerome, was brought on board to manage the property’s 2,500-square-foot events space located in the former sanctuary and gym.

“The St. Catherine is perfect for intimate gatherings such as Wedding Ceremonies, Wedding Receptions, Social Gatherings, Fundraisers/Galas, and Corporate Events,” the company’s website reads. “The intimate yet spacious 2,500 square foot sanctuary proudly displays the original art gallery quality, hand painted – stained, leaded glass windows that are as beautiful as they are vibrant… The sanctuary most comfortably seats 100 – 125 people, with additional seating in the “gym” for up to 180.”

Finley cited a press release stating the building began construction in 1876 and originally housed St. Stephens Church. A gymnasium was added in the early 20th century.

The church structure itself is a bit of a puzzle. The sanctuary does not extend fully to St. Catherine Street as one might expect of a historic church building. Instead, its main entrance faces Shelby and a more plain wall faces south.

It was common for churches in the 19th century to build the back portion of their facility first and then save up for a grand main facade. (As was the case at Concordia Lutheran and Calvary Episcopal, among others.) Could this have been the case with St. Stephens as well? If you know any of the church’s history, please share in the comments below.

In a later report by Insider Louisville, Caitlin Bowling added that Head First Media chose the church site for their new studios after Underhill Associates announced plans for the Germantown Mill Lofts along Goss Avenue, where they had previously been located for 16 years. The company paid $34,000 for the church property before renovations.

The St. Catherine is now booking events and plans to host its first wedding on April 2.

Sited just a block south of Shelby and Oak streets, where a number of businesses have recently opened, The St. Catherine is well positioned to continue the momentum of Shelby Park and Germantown. Among the new businesses in the area include Scarlet’s Bakery, Argo & Sons Coffee, and a restaurant that will fill another vacant structure.

Around the corner on Goss, the Germantown Mill Lofts are wrapping up with the completion of its restaurant, Finn’s Southern Kitchen, and a handful of other businesses are slated to open including a new gym and bar.

The restoration also shows the ripple effect that one development project can have on an area. With the conversion of the Germantown Mill Lofts, not only did we see that new project revive an underutilized building and spur growth in its immediate facility, other projects like this one spin off in the surrounding neighborhoods.