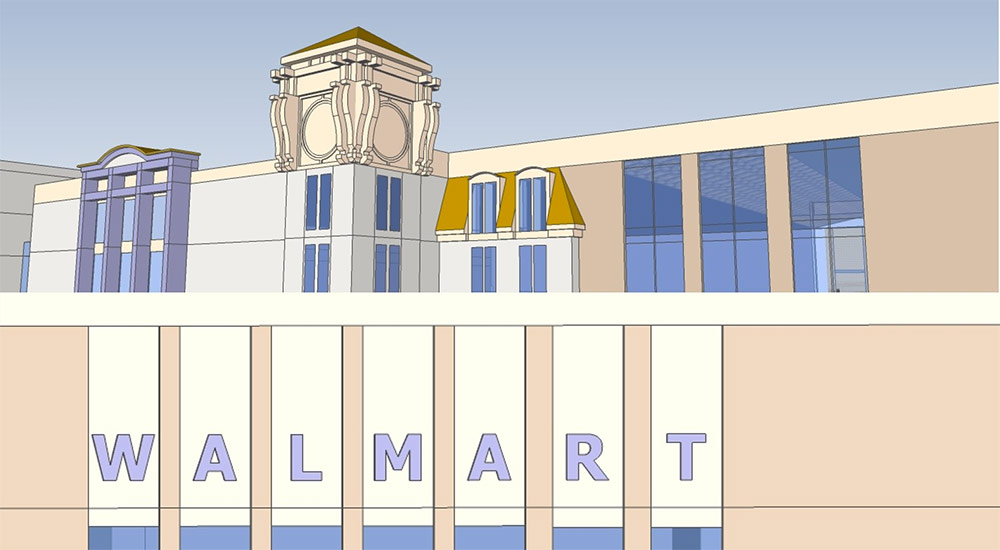 [Editor’s Note: This post originally appeared on Nick Seivers’ blog, Urban Composition, where he re-imagines various sites around the city. He has been a regular contributor to Broken Sidewalk.]

A Walmart is proposed for West Louisville at the corner of Broadway and Dixie Highway at 18th Street. This is a Walmart that could be built on suburban Bardstown Road. It could be built in Mobile, Alabama, El Paso, Texas, Cambodia, or the Moon for that matter. It’s the same design that could be built anywhere. It is proposed near our growing Downtown without appreciation for its unique urban context. And that is chief among my concerns with this project.

Over twenty years after Philip Morris rolled the last cigarette on this site, new energy is being directed to the intersection of two major corridors. This is where everything comes together. This is a node, or a connection point. It’s a geographic point where economic and social resources and activities are centered. A successful node includes a wide spectrum of economic and cultural uses arranged in close proximity to foster interactions. A successful node is a place with varied sizes, shapes, and textures of facades and leasable spaces. A resilient place is adaptable to changes in trends, from subtle to sea-change. The new uses of this node must be adaptable and a place worth adapting with over time.

New Energy at the Broadway at Dixie Highway/Eighteenth Street Node:

That Walmart will require city incentives to employ about 300 people at the store. The store will contain approximately 150,000 square feet. That’s equivalent to over 3 acres—on 15 acres—or over 3 downtown city blocks. On a major node about one mile from Downtown Louisville, everything about the project’s scale is supersized. To put this development in perspective, the site and other areas of town shown at the same scale:

An analogous site in terms of size and age of surrounding structures is Shelby Park. At 16 acres, Shelby Park is just about the size of the site that includes the proposed Walmart at 1800 West Broadway.

In traditional urban design, commercial buildings are located at the sidewalk’s edge. This makes it easier to access the store by foot, especially when residents are close by in an urban part of town. It’s also the existing guideline in Louisville’s Cornerstone 2020 Land Use Codes. In the neighborhoods surrounding the Walmart site, block lengths are short and streets are narrow. Often there are trees to shade the street in warmer and rainier months. This is a walkable neighborhood. The streets around the Broadway/Dixie/18th Street node were platted before the automobile was invented. In many ways, walking is preferable to driving in this arrangement of streets.

Buildings must contribute to their surroundings—make them better than they were before—and add to the vibrancy and vitality of the street, the node, the neighborhood, and the community as a whole. If you have read my other posts, you will see what kinds of things I dream up for a few acres here and there around our city. If I had 15 acres near downtown at the intersection of two major corridors on which high frequency, high ridership bus routes operate, my thoughts go immediately to development oriented around transit.

I start to wonder, how many cars pass by here a day? How many transit users each day? How many people are walking by? How can I get them to come into my store? Buy or rent my apartments? What makes this place unique and how do I capture that? What does the project want to be? How can I increase the intensity of development, retail activity—the vibrancy of the place—and continue this activity for years to come?

So in that sense, my project cannot be a one-off project. It’s a project that builds to a specific place, to another project, then another. It’s symbiotic. It creates a buzz, a feel, an atmosphere. It is adaptive to the evolution of the place. It is an investment in the community.

I would begin to accomplish some of these aims through orienting the building to the street and going vertical with both the Walmart store and parking to open up the land to more intense, mixed-use development.

A two-story Walmart is responsive to the physical environment and value of land within our urban neighborhoods. This land isn’t cheap. There aren’t many sites this large, this close to downtown, that are surrounded by walkable neighborhoods, and with city services available right now. You want the development to have more sales per acre, attract more tenants per acre—to get more bang for the buck. From the developer’s perspective, this makes it easier to pay down the bank note. From the city’s perspective this makes it easier to afford maintenance on the roads, life safety services, and education services that are used by the shop owners, employees, customers, and residents of the site.

My concept will cost more, but it will be worth it economically. The city needs to come in a little more aggressively in financing parts of the project (infrastructure) and in shaping the use of this important node (planning and economic development).

Walmart is the big square on Broadway between Dixie Highway and Dr. WJ Hodges Street. Behind Walmart, a 600 space parking structure would be constructed with parking on the ground level, a ramp, and an above grade parking deck.

The Walmart-brand gas station is located off of Dr. WJ Hodges Street just behind the existing businesses that front on Broadway.

The curved building would be a great location for additional shops on two levels, including perhaps a sit-down, family-style restaurant.

Rain water drains toward one of the bioswales or the lake featured within the park at the center of the site (larger stormwater management features shown in blue). In an area so susceptible to flooding and sewer backups (as revealed by MSD tearing down so many houses in the area due to flooding), the solution city agencies are committed to involves removing blocks of homes to make way for engineered stormwater detention structures, I believe that some of those functions could be moved to this site and incorporated into the aesthetic.

The building redesign, plus most of the new streets with on-street parking leaving approximately seven acres for additional development.

I do not have the most detailed or up-to-date capabilities for estimating cost for this project. For Phase One, I would estimate the price tag would come in over $30 million. (Insider Louisville estimated the cost of the proposed Walmart around $25 million.)

So the price tag looks to come in around $35 million?

The whole project could come in around $100 million, mostly funded with private investment that is attracted to the potential of this newly defined place. The Walmart part of the project sets the tone for all other development to follow.

However, once the roads are constructed they would be turned over to the city for public use and the requisite maintenance of their upkeep. The city parking authority, PARC, would build and operate the garage. The garage would serve the entire area. A fee for use could be collected on receipts and the sale of new lots (dwelling units and offices) surrounding the proposed Walmart. So parking would appear to be free, but it is disguised within other transactions. Some of the spaces should be reserved for use by the surrounding land uses when they come online (key card entry at a gate, for example). Alternatively, PARC could install meters at the spaces, especially those on the upper level. Gated entrances to parking would obstruct traffic circulation on the streets to and through the garage, obstruct access to any drive-thrus such as the pharmacy window, and create a time penalty for the “owners” of reserved spaces.

Possibilities for capitalizing on a public-private partnership in West Louisville:

Overall, this concept is about building place. Tweaking the design of the proposed Walmart to orient the building around Broadway and Dixie Highway and moving some pieces around on the site opens the site up to being a great place and an asset not just to West Louisville but the entire city that can evolve over time.